Workwear and The Urban Outfitters Reissues

Urban Outfitters continues to put the bite on the workwear trend that has been popping up with greater regularity than ever on the city streets.

However, now, rather than producing high-quality goods that withstand the tests of time and heavy wear, companies dump the old standbys in favor of new, cheaper, easier-to-make products, cutting corners when, where, and however they can.

In Japan, where quality is king, companies like boot maker Red Wing and outerwear giant The North Face (c/o Nanamica) have offered their customers some exclusive products. Demand is much higher there. For the longest time, in the US, eBay was the only source for well-made “heritage” pieces from American brands older than the dirt their products were built to withstand. That is, until Urban Outfitters elbowed their way into the design offices at some classic American companies.

My take on the workwear trend goes as follows: with an economic downturn looming, with a desire to refocus our attention domestically, we returned to comfortable, classic American-borne products. Sure, they may have shipped the factories overseas, but the look is pure US of A.

For further reading on workwear, see Japanese publication Free & Easy and their corresponding Rugged Museum, and articles from this season in The Los Angeles Times, The New York Times, and The Seattle Times.

In celebration of 40 years in business, the company named for co-founder  Jan Lewis after her boyfriend, engineer Murray Pletz, begged her to design the pack for his newfangled aluminum frame, JanSport has re-crafted some of their classic designs, and Urban Outfitters received exclusive rights to carry three of the bags in their stores.

Another bag company, San Francisco’s Timbuk2 was tapped by UO to reintroduce the model that started it all. The Kings of Cordura have come along way from their classic 1989 bag, but this bike messenger staple, with its – at the time – unique double strap, set the standard for years to come.

The Falkner, not the most handsome of their heritage collection, but Massachusetts brand Penfield, with its windproof down never fails to impress me in its desire to make a high quality, affordable product.

Minnesota-based Red Wing, purveyor of perhaps the widest range of boots and shoes available to the American man, has become the standard-bearer for work boots in this country. They’ve worked with the folks like those at David Z, J. Crew, and Nom de Guerre to bring back some old favorites. 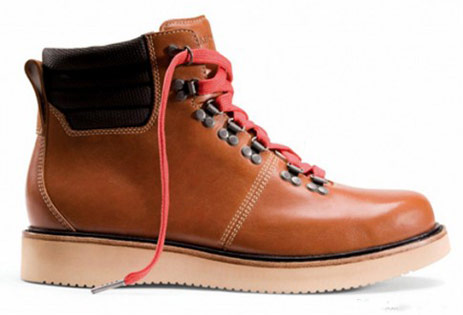 Famous for their injection-molding technology which created a nearly  waterproof boot, New Hampshire’s Timberland was originally named The Abington Shoe Company. The Abington Collection, initially available at ARC has been kickin’ around UO since just before the holidays.