Filmmaker and blogger extraordinaire, Jake Davis is attuned to an aesthetic so similar to my own, its remarkable how often I visit his site and think, “Oh, man! Beat me to it.” He’s a hero, hammering out the hits time and again, and he does such a good job of explaining style — something I struggle with daily. I’m so honored to have his words grace the pages of all plaidout.

I think more than anything my father gave me a level of taste. And as I’ve gotten older and have met a wide range of people from the cool street kid to the uber-celebrity you learn that taste has nothing to do with money. There’s an inherent taste level in all things. And there’s a value in that… Not a price tag but a value.

My father taught me to share that taste with the people. Now, there was never a sit down lesson. It’s just the way he is. So I feel with my music videos, commercials, and films there’s a certain taste level that I try to achieve. It’s not something you can put your finger on. It’s just there. And when I haven’t achieved it. He’s the first person to let me know. Tough love and shit.

There’s an endless influence when you have someone so willing to share themselves with you like that. But if I had to give one example of the lessons he taught me that have had the most resonance it’s the times where he provided me the opportunity to be the person I wanted to be, but always let me know there’s an origin to everything.

“Jake, that Beastie Boys record you love so much samples this Beatles album. And the Beatles were influenced by this album. Check it out.” He was never a hater like most older people are for the new shit. He always made it a point to understand the new shit and provide the necessary information to me to make tasteful decisions.

If at age six he hadn’t bought me that first Public Enemy cassette, gotten my pants tapered and hemmed, and introduced me to David Lynch films I’d be a completely different person. That’s for sure. I was able to understand what I like at a very early age. And for that I will be eternally grateful because some people spend their whole lives trying to figure it out.

So instead of a picture of the old man and me. How about a typical lesson. Here’s a still from my new video for U.S. Royalty featuring my friend lead singer John Thornley. And here is the origin… Martin Sheen as Kit in Badlands. Always do your homework just not necessarily at home. 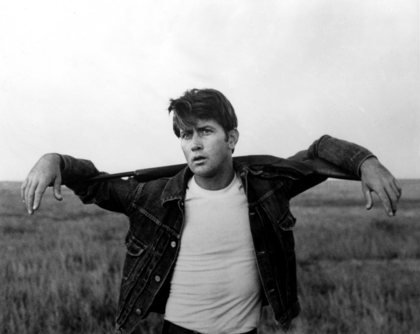