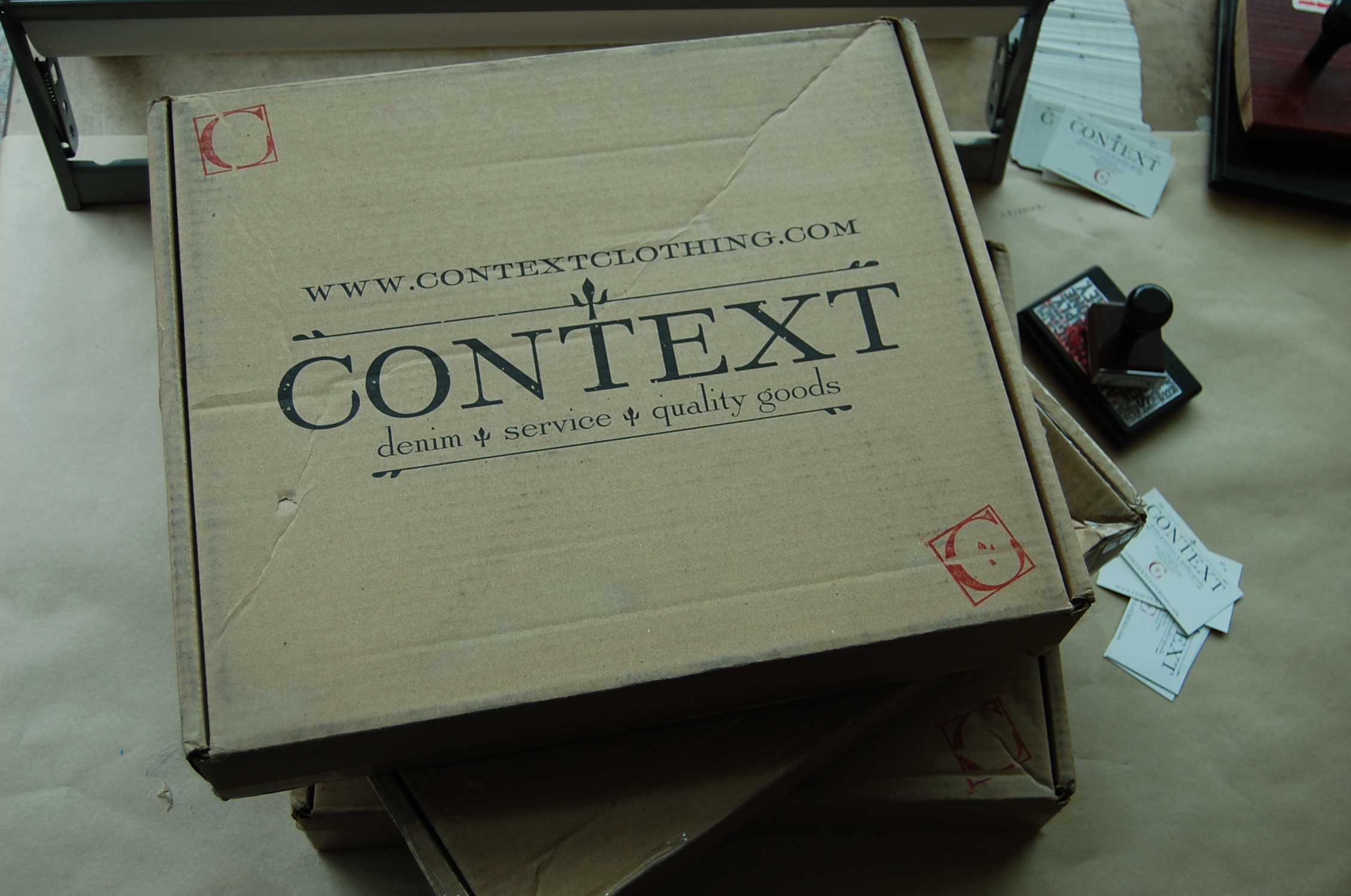 Recently, I spent a day tracking down a shirt — an entire day spent searching for a single, simple article of clothing. Granted, it was the type of shirt I was looking for that proved challenging, I noticed something in the hunt. These days, the average salesperson is not prepared to be challenged. If it isn’t in stock, well, “I’m sorry, sir.” That’s it. No phone call to corporate. No suggestion of another outfitter that might better handle my issue. The image of a loose tooth lassoed to a sturdy doorknob comes to mind. There’s no desire to serve. Correct me if I’m wrong, but salespeople count themselves among those in the service industry. It’s in the title, folks. From the highest of the high end men’s clothier to the lowest copycat of the copycat of the copycat, I marveled at the lack of attention. 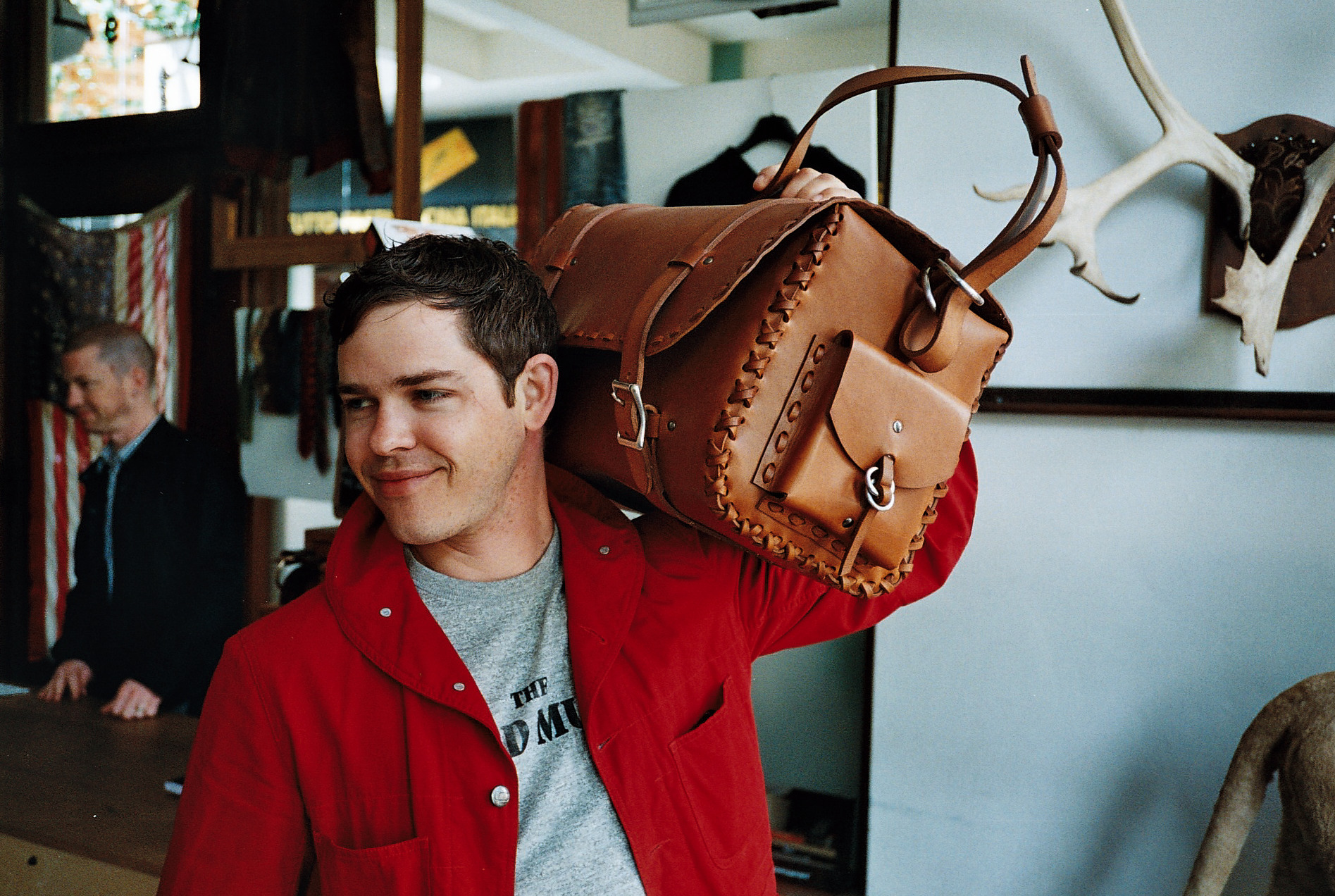 Imagine a men’s shop where you can feel comfortable not having the answer, where the journey to discovering that favorite shirt is as interesting as the destination. Imagine having a knowledgeable sherpa along for the trek, a Norgay to your Hillary. Imagine going in with the words, “selvedge denim” written on a Post-It note in the flowery script of a girlfriend or a wife, and walking out with the best-fitting pair of jeans you’ve ever owned (I’m aware the image may be lost on regular readers as you count yourselves among the more well-educated garmentos, but I know the question, “What’s selvedge?” lingers among my nearest and dearest friends). Context is one such shop. 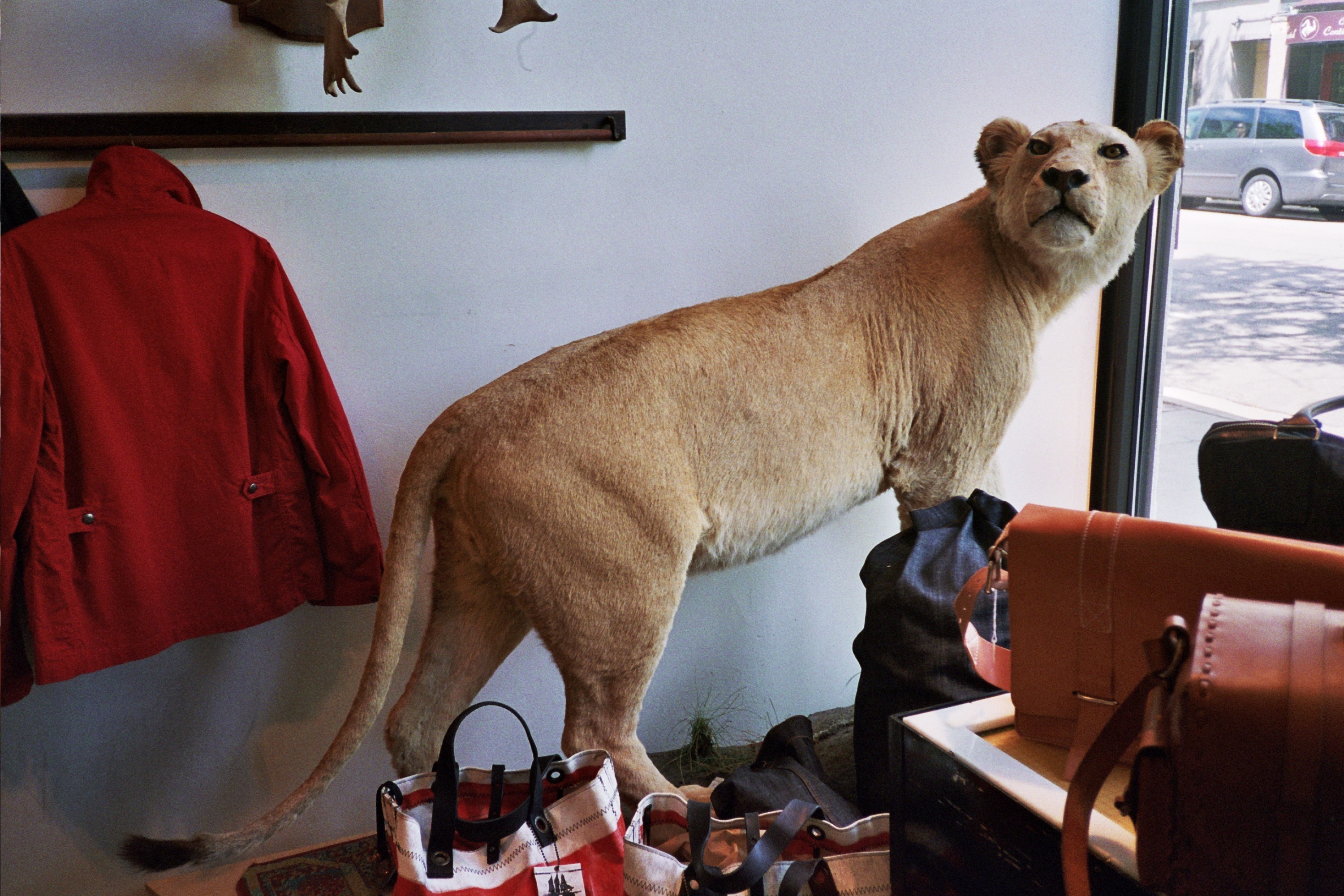 Described as a liberal oasis, Madison, Wisconsin plays home to a store that acts as its own kind of oasis, that of the laudable customer service kind. In an age where the stodgy men’s specialty stores struggle to compete with the discounts offered by the big boxes, where e-commerce is the name of the game, the personal touch is the first thing to go. Not so in Badger Country. When it comes to caring for their customers, Context Clothing, established in 2005 by former bartenders Ryan Huber and Sam Parker, along with Sam’s brother Ben, counts itself among few I deem excellent. With a keen eye for quality, a panache for the pitch, and a passion for design, Ben, Ryan and Sam provide a unique, well-curated glance at the great shift that’s happening in menswear right now, and they do it with a down-the-middle, matter-of-fact attitude befitting three dudes from Wisconsin. Whether you pay them a visit in person or speak with them over the phone* be careful. With their broad badger accents, they can coddle you into submission, and you could walk away with four pair of their KMW 1980 Hand Dye. Then again, there are worse things that could happen. 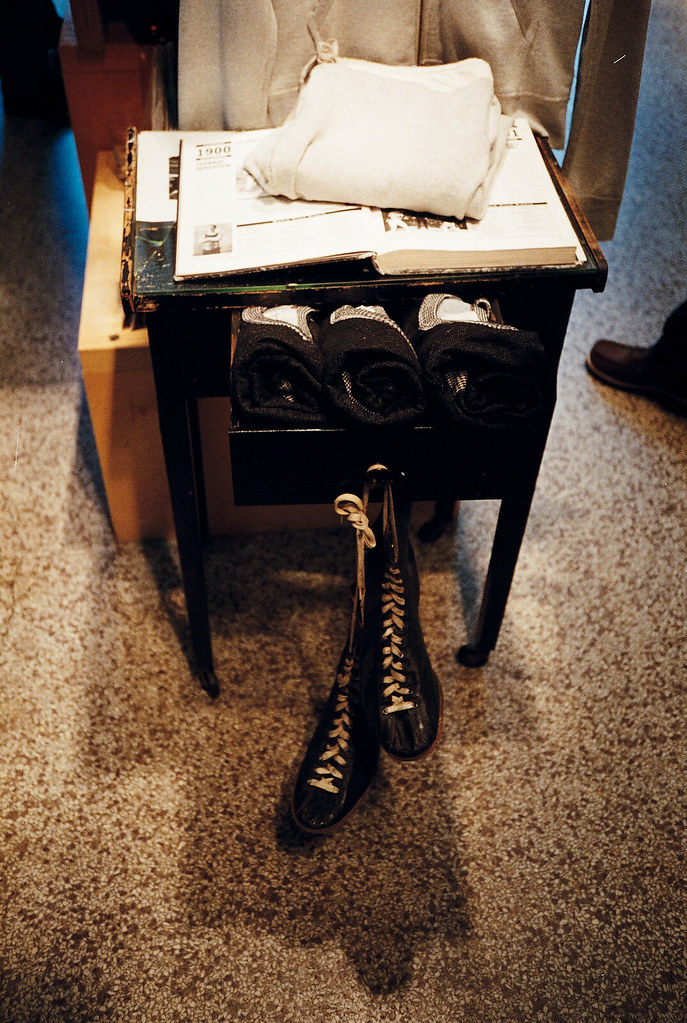 Counting the state capitol among the many historic and strikingly beautiful buildings in its vantage, Context sits smack dab where a men’s hangout should. 113 King St.** once known as Snappy’s Place, Madison’s source for horse racing forms, tobacco products, and stag mags, still caters to man’s vices, albeit in the form of bench made boots, hand sewn moccasins, rare denim, and fine vintage and vintage-inspired workwear. 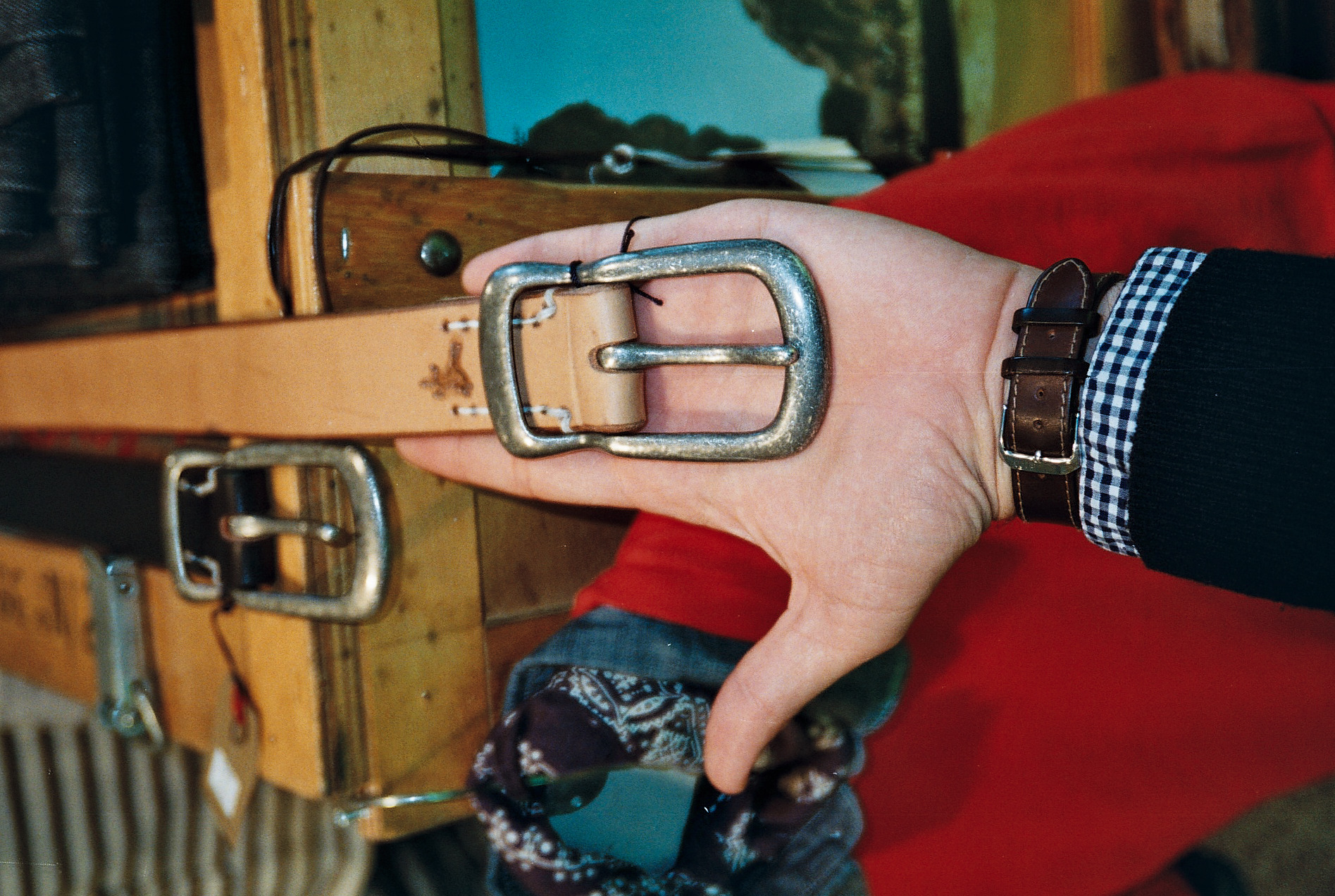 Featuring young brands like Apolis Activism and Kicking Mule Workshop, and newfangled products from heritage brands like Alden and Gitman Bros., Context’s ability to draft the heavy-hitters and even heavier exclusive collaborations is impressive, especially considering they’re not based in large market Los Angeles or New York. 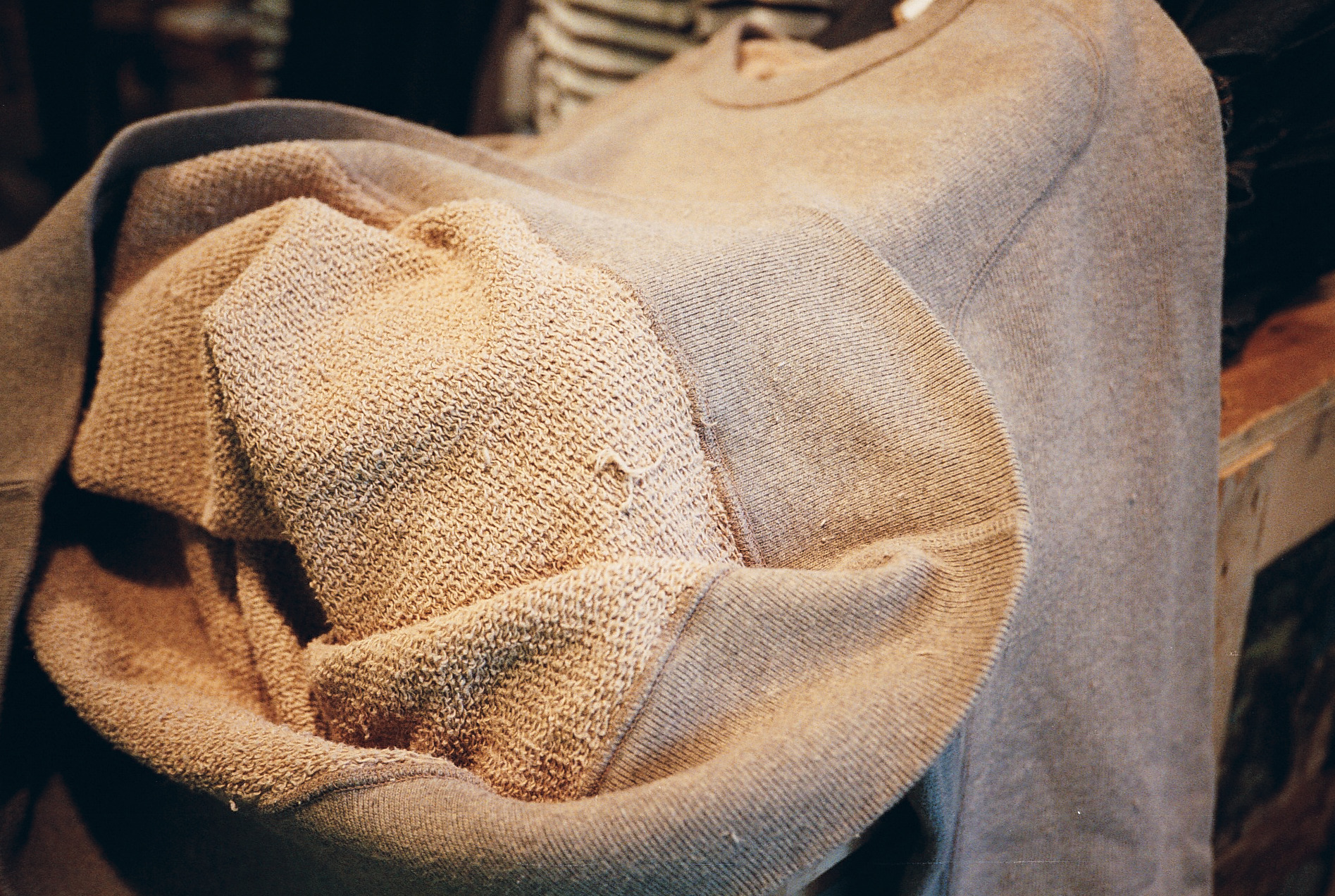 My friend MP recalls Ryan’s, “If you’re into hand loomed crewneck sweatshirts, this is the garment for you!” KMW Crewneck. 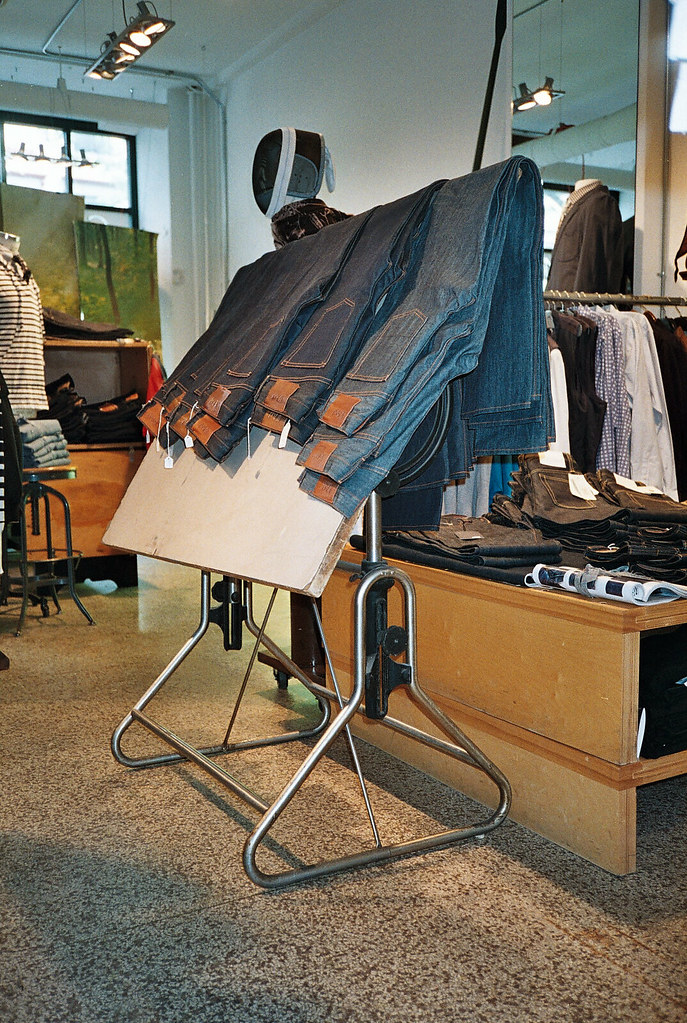 As a Midwesterner myself, I see the same hard working, salt-of-the-earth values that I hold near and dear as these guys’ long-baller in the proverbial clean-up position. And speaking of heavy-hitters, don’t make the same mistake I did. You get Ryan started on his beloved Brewers, and he won’t stop. While my Cardinals are far superior, he can go toe-to-toe like a prizefighter. Buck v. Uecker. Fielder v. Pujols. The owners of Context are regular guys. They just happen to get really amped about Japanese looms and organic cotton and indigo. 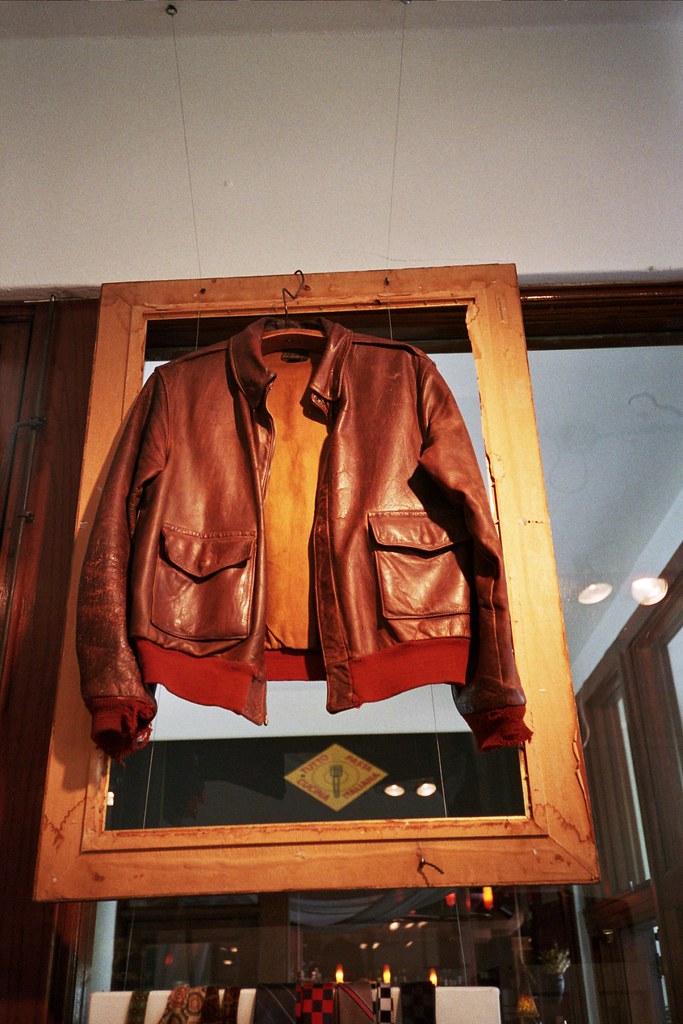 The WWII A-2 Flight Jacket of Frank Parker, Sam’s Father. 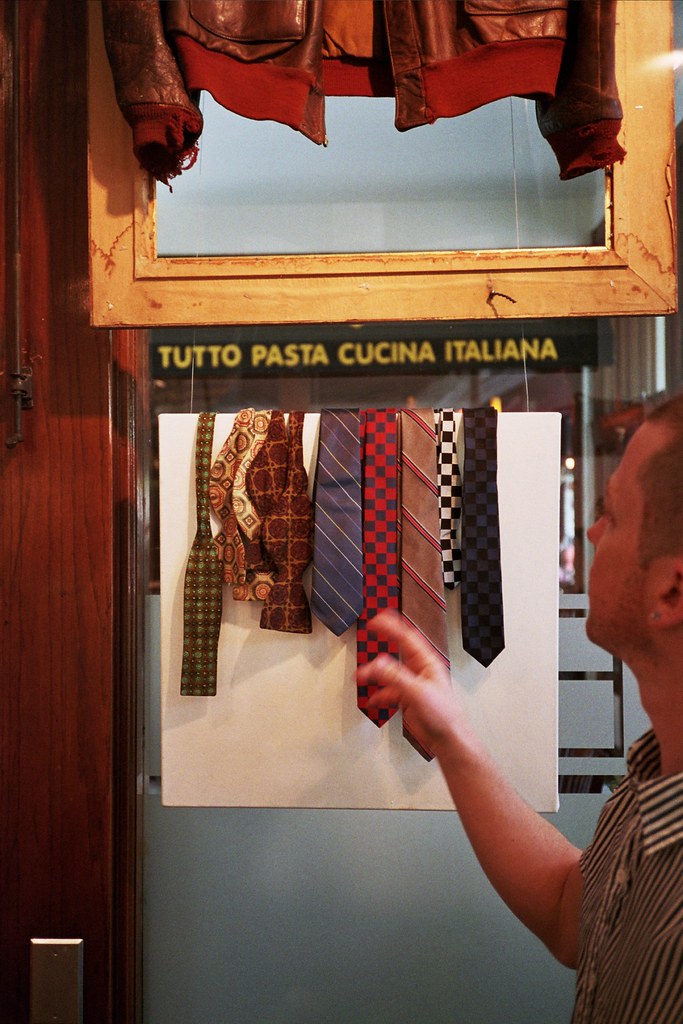 Sam Parker shows their collection of vintage bows and Band of Outsiders ties. 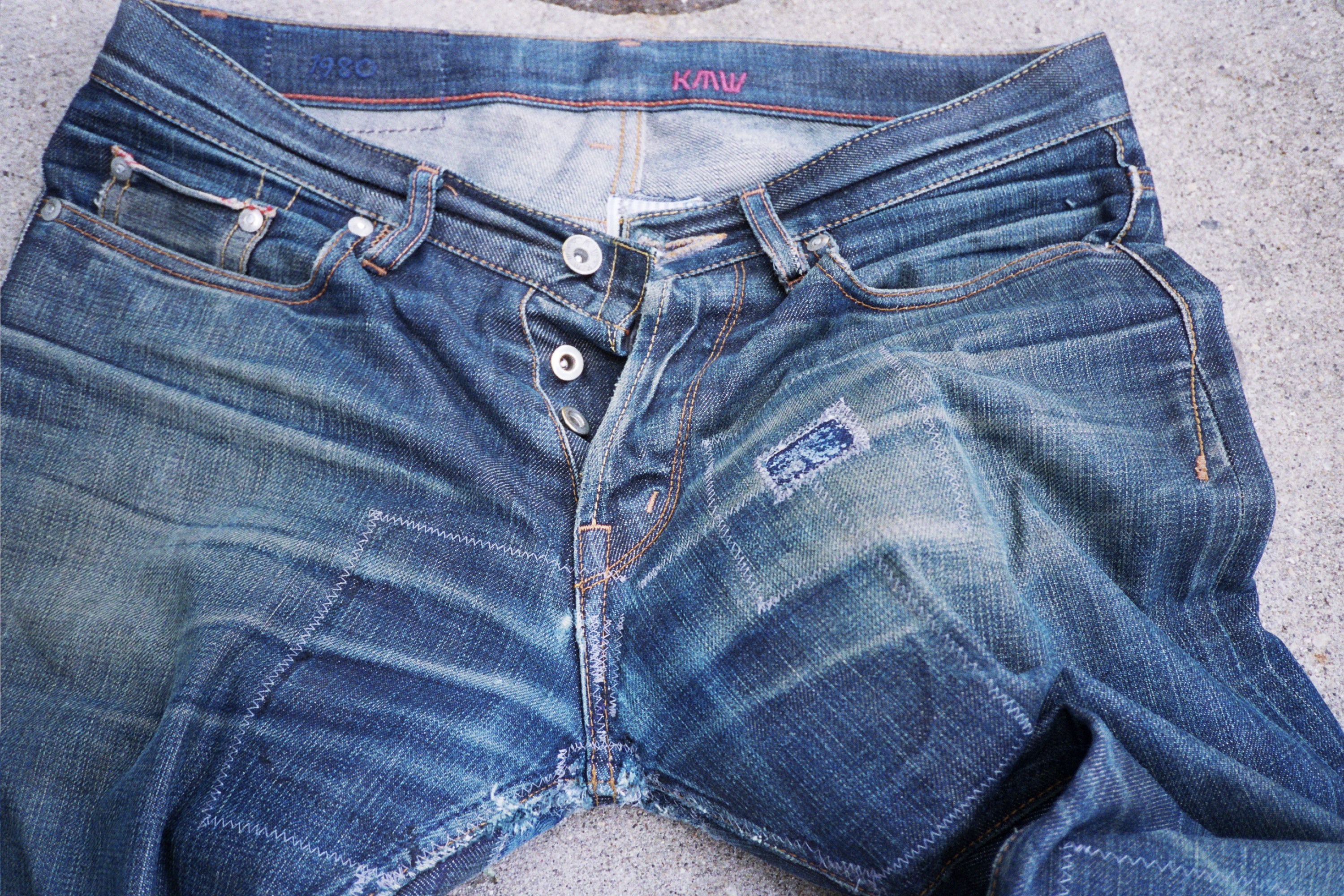 Sam’s mother will repair your jeans. They’re gnarly. Like a chainsaw scar. 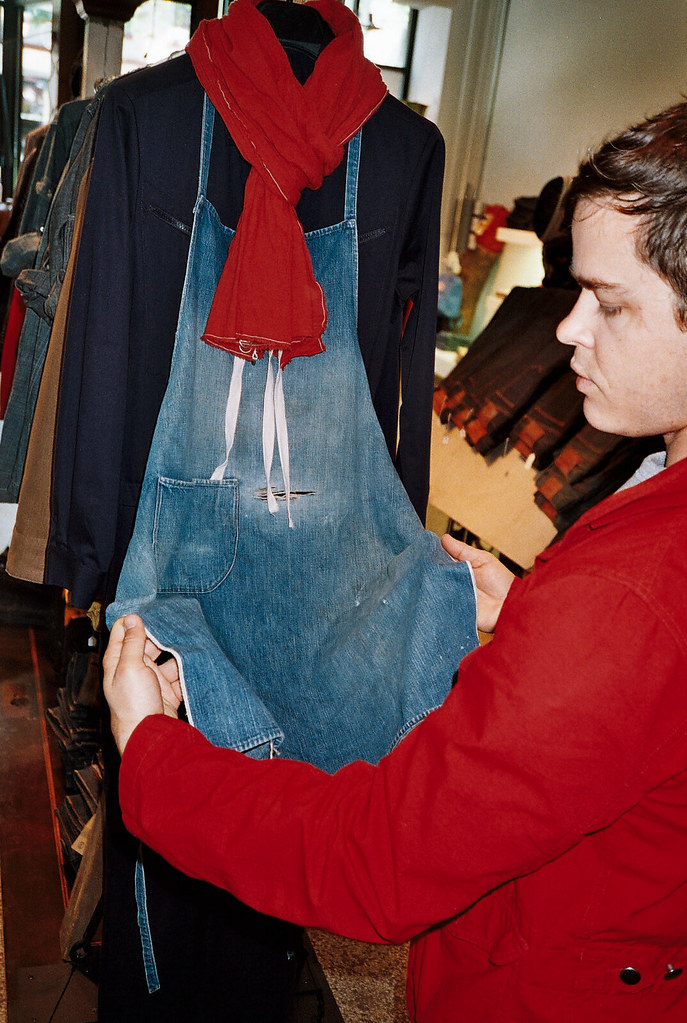 A Vintage Work Apron cut from a single swath of selvedge denim. 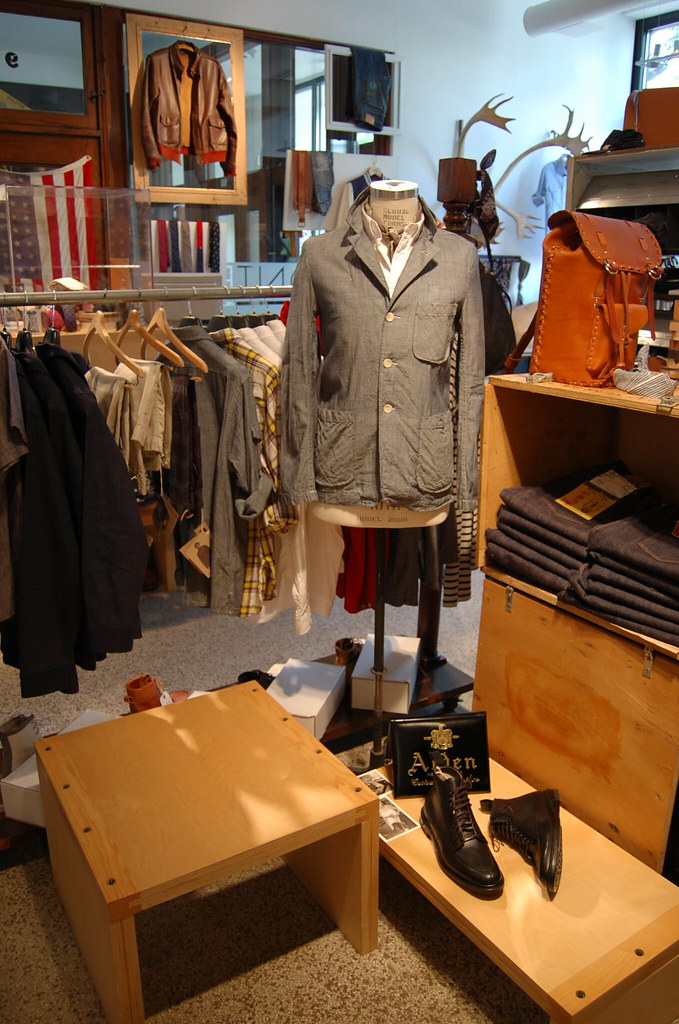 For more photos of my visit to Context Clothing complete with commentary by Ryan, see Flickr.

If you haven’t already, read The Dirty Dozen, 12 Questions for Context’s Ryan Huber by Mr. James Wilson of Secret Forts.

* I cannot stress this enough. Call them. The phone call is a lost art, but it ain’t lost on these guys. Let them charm you with their warm Wisconsin accents, thick as cheese soup.

**NB: Because they’re undergoing a reconstruction of their storefront, Ryan asked that I disclude photos of the store’s façade. Not only do I have solid documentation of what remains of the Snappy’s Sign, but I have some great shots of the antique marquee of their neighbor, concert venue The Majestic, home to everyone from Harry Nilsson to Harry Houdini.