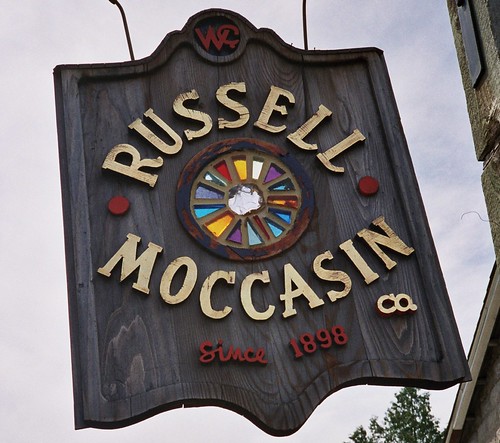 Like many of the small towns in Wisconsin, Berlin is quaint. Its main street is dotted with antique stores and cozy, perfectly-appointed restaurants. But unlike other towns, just off Berlin’s main street, there sits one of the world’s finest custom hunting boot makers, Russell Moccasin. 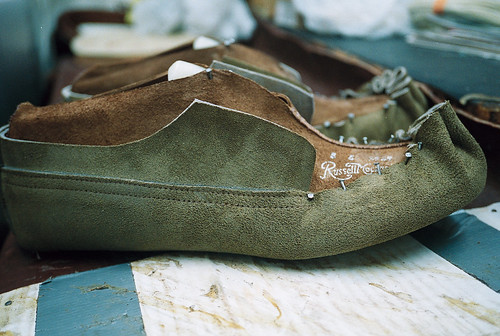 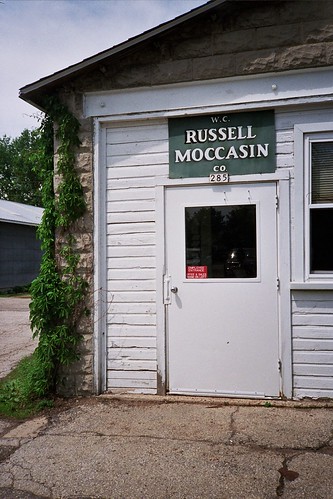 From east to west, Trappers, Mountain Men, and Native Americans wore moccasins as they settled this country. W.C. Russell Moccasin Co. makes its boots the old-fashioned way, one at a time, stitch by stitch. Russell’s current headquarters, a slouched ivy-covered building, tucked away on a side street, has played home to the craft of hand-trimming, hand-molding, and hand-stitching for more than half-a-century. 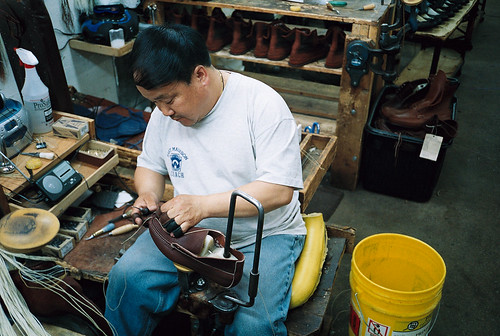 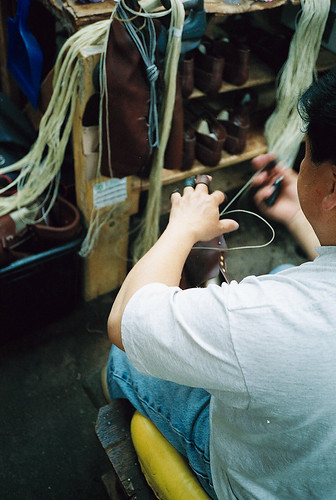 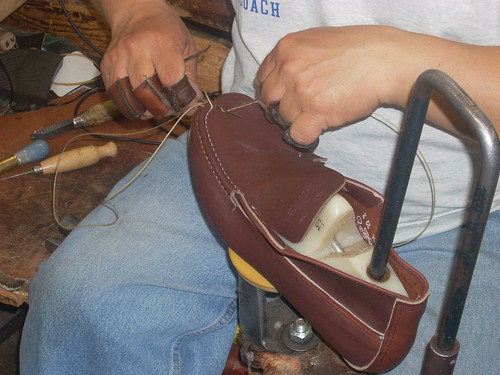 While the company says its been making moccasins since 1898, The Putnam Shoe Co. supplied engineers and loggers of the region with sturdy footwear as early as 1850. The Wright Shoe Co. (You can’t go wrong with the Wright shoe) purchased Putnam in 1865, and William Russell, brother of a glovemaker in Berlin, bought Wright in 1898. He transformed the company to make hunting boots the main attraction of the newly formed W.C. Russell Moccasin Co. 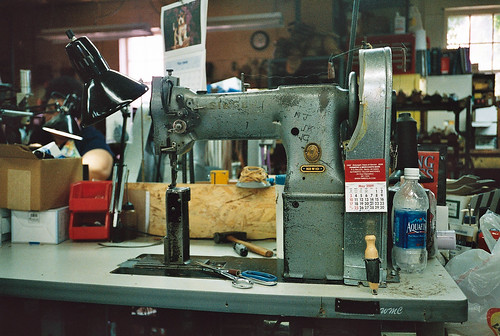 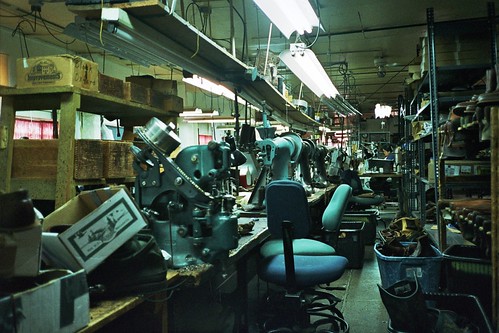 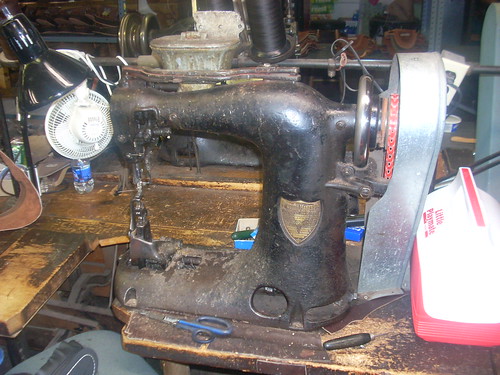 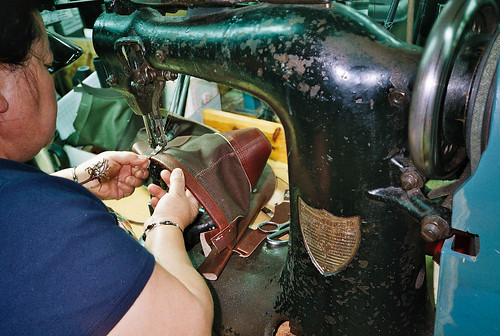 In the 1950s the company built mainly standard sized boots to sell to the sporting goods stores of the time; today their niche is made-to-order, customized from individual measurements. Their line has grown to include more than 90 styles of boots and shoes which are available in 110 different leathers. Each can be furnished in any height, size, or choice of sole. 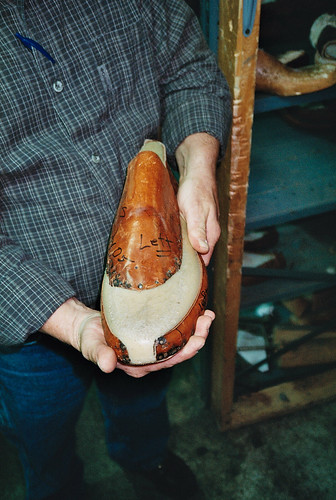 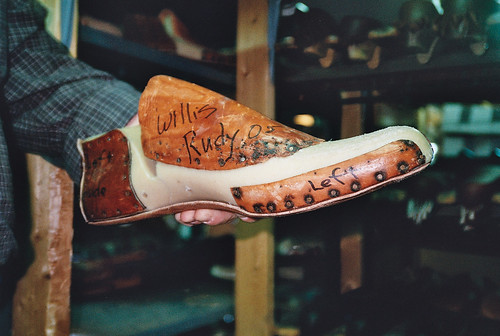 As company president Ralph Fabricius explained, “If you have one foot smaller than the other, like most people, we will take care of it. If your ankles or legs are very slender or very big, we will fit you properly. Our niche is doing what nobody else wants to do.” Doug Herge, Russell’s plant manager, went onto say, “Anything you want, we can design in about a week and build it from there.” 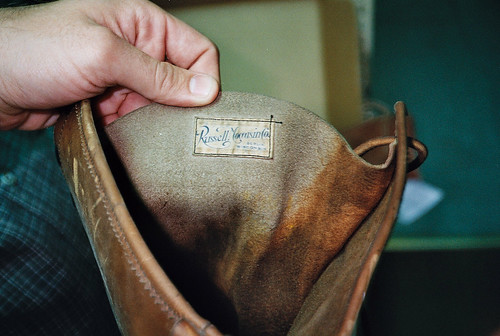 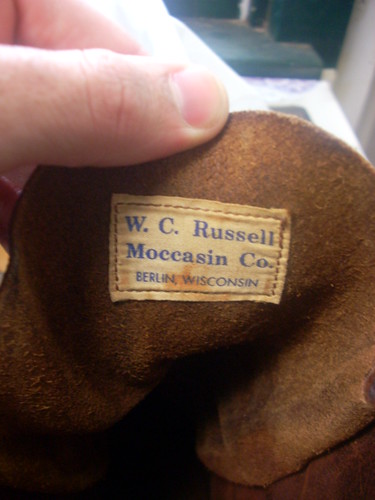 And they wear well. In 1922, on an 1,800 mile tour of British Columbia which lasted 153 days, R.B. Slatter of California wore a pair of “Ike Walton” model Russell Moccasins. The Waltons, named for 17th century fisherman and author of The Compleat Angler Izaac Walton, featured a triple-vamp construction with no two seams facing. During his journey, Slatter wore out two pack horses. In fact, other than Slatter himself, the only thing to last the entire trek were his Waltons. “I’ve seen boots come back that are forty, fifty years old,” Mr. Herge said proudly. “Slap a new sole on there. Good as new.”

Over the years, many sporting goods stores carried Russell’s products. Abercrombie & Fitch, Sears & Roebuck, Orvis, and Eddie Bauer were among them. In 1927, when he stepped off the Spirit of St. Louis in Paris, Charles Lindbergh was wearing Russell Moccasins. The Prince of Wales wore a pair a year later while on safari with Denys Finch Hatton. 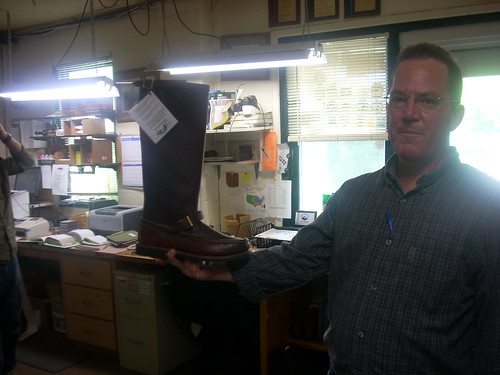 Mr. Herge shows off a pair of knee-high snake boots. Tired of dodging the vipers on his tropical golf course, the King of Nepal had a pair of these fashioned with golf spikes. 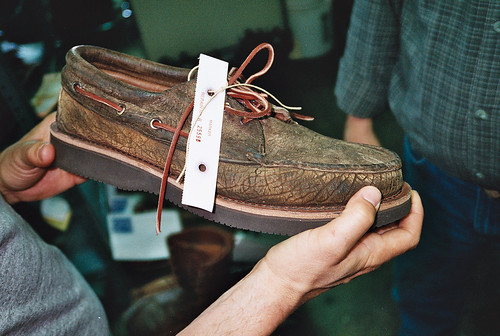 Rhinoceros Hide Cushion Collar in for a repair. 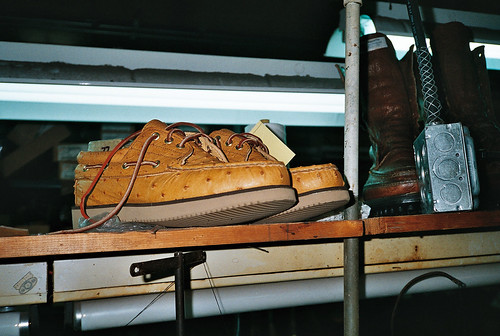 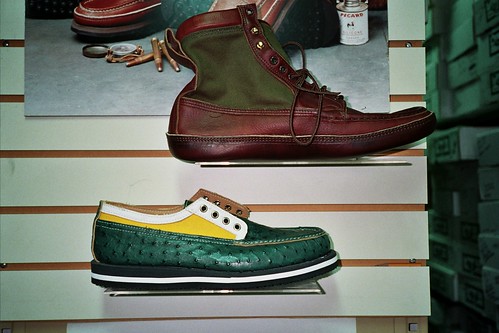 With a “You kill ’em. We grill ’em” mentality, Russell accepts game skins of all stripes from hunters the world over, tanning and stretching them to make the most handsome and sturdy footwear available. While there, I saw boots and shoes made of every imaginable leather: elephant, rhino, hippo, ostrich, shark, and deerskin, to name a few. 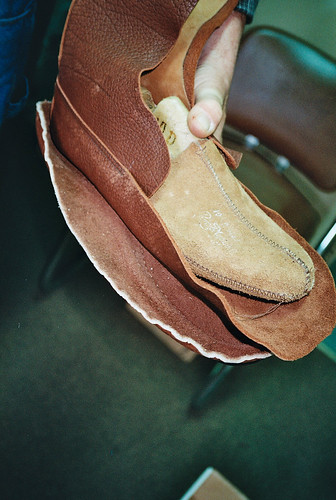 In 1910, Teofil Luzinski invented the “Never-rip” seam, where the toe-piece overlaps the bottom and is sewn with a double-lock stitch. A pivotal breakthrough, not only did it make for a stronger, more waterproof boot, but it created an iconic look. 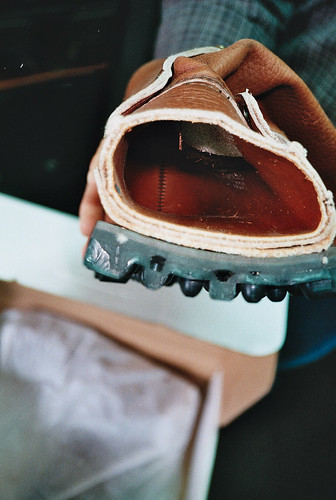 Note the signature double-lock stitch seam up the middle of the toe. 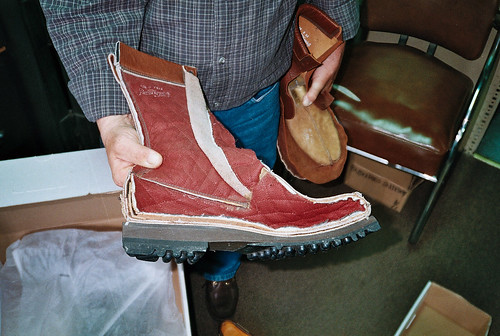 This crosscut nicely displays the many layers of a Russell Moccasin.

Stuffed into the company’s wooden file cabinets are the measurements of more than 50,000 customers, from celebrated big game hunters to presidents and kings, from big name celebrities to those who simply value quality construction and utmost comfort. Counting myself among the satisfied, Mr. Herge measured me, and in no time at all, I was properly fitted for a custom pair of the Safari PH. 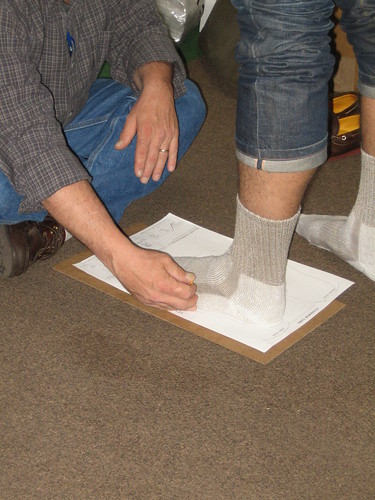 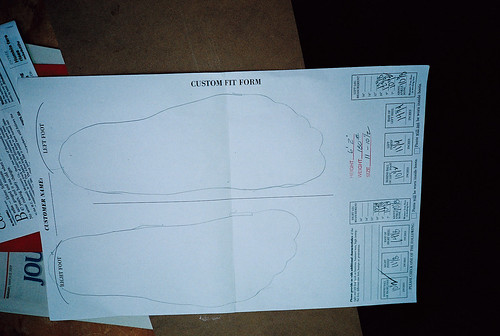 Picture a world where every shoe starts with a “Custom Fit Form.” 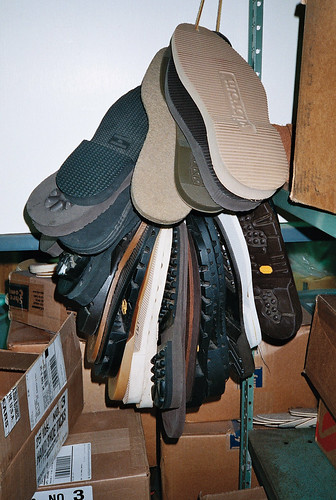 They got sole in Berlin, Wisconsin. 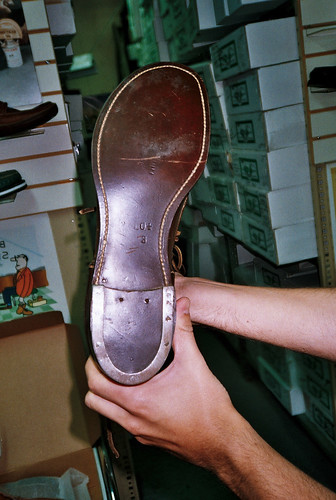 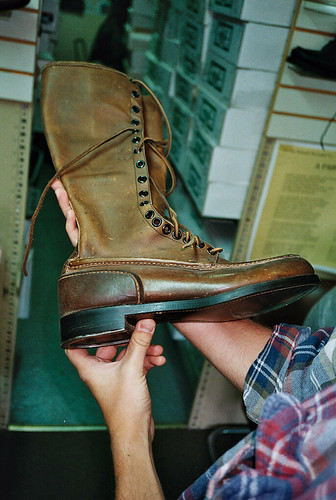 The custom fitting comes at a price. A good pair of custom-fit moccasins can set you back upwards of $600 or more. Keep in mind this is a pair of boots which are made to your exacting specifications, ones that when properly maintained, barring any run-ins with a big cat, should last a lifetime.

As with many of America’s heritage brands, Russell Moccasin deals more often and in greater volume with dealers in Japan. As Mr. Fabricius told me, “They like to do business with old, established companies, apparently the older the better.”

The major advantage to dealing with the folks at Russell is that the customer is able to communicate exactly what he wants his boot to look like down to the last natural-flax thread. Their website does a nice job of communicating just how easily you can design your own boot, but, as always, I recommend giving them a call. “One of the reasons for Russell’s continued success is our customers,” Mr. Herge told me over the phone. “We are constantly evolving, innovating. We reinvent our boots with every stitch, every conversation.” In fact, conversations with customers have lead to the creation of several of the newer styles. The Prickly Pear Birdshooter evolved from talking with some customers in Texas. The different variations of the PH Safari Boots are directly related to climate and terrain. While a 14-inch all-leather model would seem out of place in the heat of Africa, it was just what the doctor, or in this case a Namibian PH ordered to combat warthog holes and thorns. A PH in Botswana noted that a “heel digs into the sand.” Russell now offers a PH boot with a wedge sole to reduce foot fatigue. 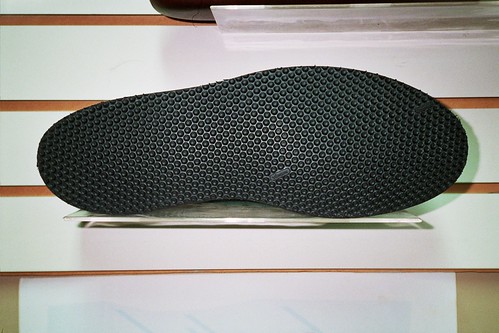 Imagine being able to call Mr. Herge and ask for “The All Plaidout Knockabout” or “The Wastler Birdshooter.” As I have begun to wear my boots this fall, whether burning brush with a friend or cleaning up the yard with my father, I find them perfectly suited to the activities I’ve chosen. As Mr. Herge cautioned me, I’ve already found them to be more comfortable and feel more broken in than my oldest pair of boots. I’ll even reach for them before my more technical 12-year-old Dolomite hiking boots the next time I hit the trails. To own a pair of Russell Moccasins, an icon among outdoorsmen, is to walk in the footsteps of history, handcrafted in the US of A. 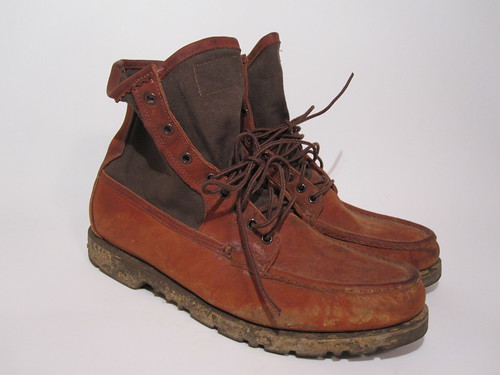 My new Safari Boots with custom leather after a day burning brush.

#For all 83 photos of my trip to Russell Moccasin, visit Flickr.
##To purchase a pair of elephant hide PH Safari moccasins Ryan Huber picked up on our trip there, visit Context Clothing.
###Special thanks to all the folks at Russell Moccasin.