What’s in the Box? Pierrepont Hicks

In the first video of what I hope to be an ongoing series from my good friend, Joe Gannon, he features the packaging and product details of relative newcomer to neckwear, Pierrepont Hicks of Minneapolis, Minnesota. The tie featured is their Field Two Tone.

I must have had this conversation a hundred times in the last several months. To a certain guy, packaging matters. Ryan Huber of Context Clothing speaks ad nauseum of how much he appreciates the way of the Japanese, in particular denim company 45rpm who’s been known to wrap shipments in muslin and chambray. Emil Corsillo of The Hill-Side will tell you, in his experience, it’s just a way of life in Japan. “Everything comes wrapped over there.” As their culture’s appreciation of high quality goods, presentation, and attention to detail makes its way stateside, it’s my hope more companies follow suit.

And what of Pierrepont Hicks? I’ll let Mr. Gannon’s e-mail speak for itself.

I was intrigued by the idea that a couple, young daughter in tow, would move from New York City to Minnesota to chase a passion for producing a beautifully handcrafted tie. Putting that much faith into a venture is something which will continue to impress me, and it’s something I will steadfastly support any day. 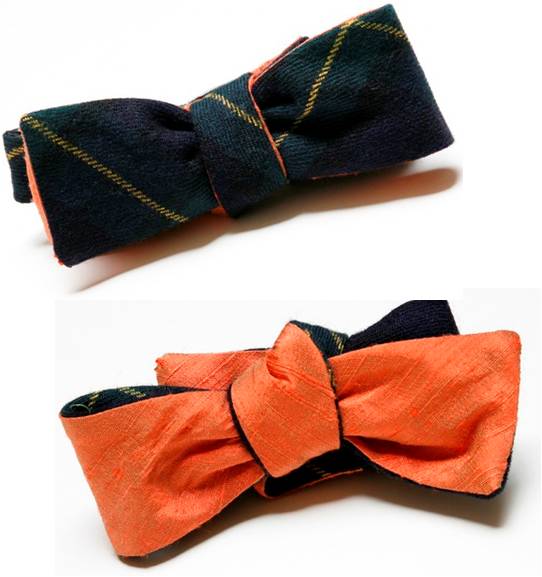 I was taken by their quote, “We tell our children to follow their dreams, shouldn’t we teach by example?” Also, “We will always be American-made.” The tie has a great weight, and a solid, quality construction. As the blaze orange contrasts with the tartan, it speaks to the versatility of its wear. I’ll throw it on a white oxford before a work meeting, or pair it with a blue chambray and a pair of muck boots to the Masten’s Corner Wild Game Dinner.
—
http://twitter.com/joegannon

As for that Wild Game Dinner? Mr. Gannon told me, flatly, “I’m pretty sure you’d get thrown out for any talk of websites. These are country folk. It took me a long time to get an invite. It’s like a poor, country boy’s Masons Lodge. Most of these cats are gentleman sportsman…. You better have a truck, though.”

We look forward to the coverage of the dinner, Joe. Thank you for sharing this video.

Special thanks to Kat and Mac McMillan of Pierrepont Hicks for sharing their quality ties with the world.