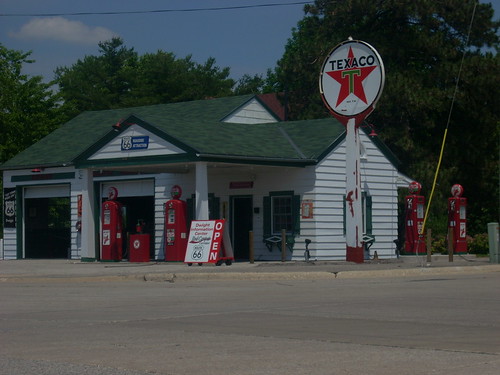 Route 66, referred to as The Mother Road in John Steinbeck’s classic The Grapes of Wrath, was a mythical stretch of byway that provided a way out to tens of thousands of Dust Bowl Era Americans, whose suffering during The Great Depression led them to seek solace in the promise of a better life — and better wages — out West. Along its many thousands of miles, towns sprouted around filling stations, motels, and diners.

Chicago-native Nat King Cole popularized Bob Troup’s song in 1946, at the height of the highway’s popularity.

Perhaps it’s because I grew up riding my bike on parts of its Missouri remains, or it’s possible in a past life, I was a sharecropper, a real life Tom Joad, eager to stream past every mile of Route 66 to its bountiful end, an Eden known as California. Either way, I’ve always felt a kinship to this stretch of gravel, attracted to its ever so American story, that bootstrap mentality that seems never more pertinent than today. As someone on the road told me, “You move until you find that what suits ye,” and God forbid, if the fellow wasn’t speaking directly to me, I’d have thought I was hearing it from a Higher Power, some sign from above telling me to “Git a move on!” 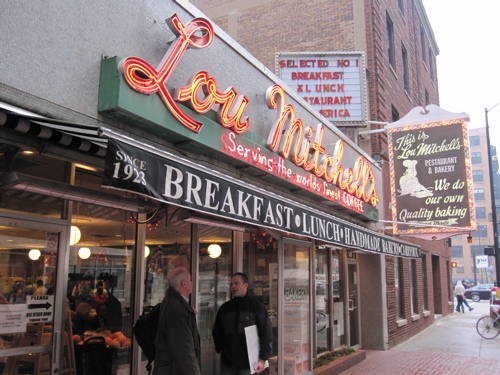 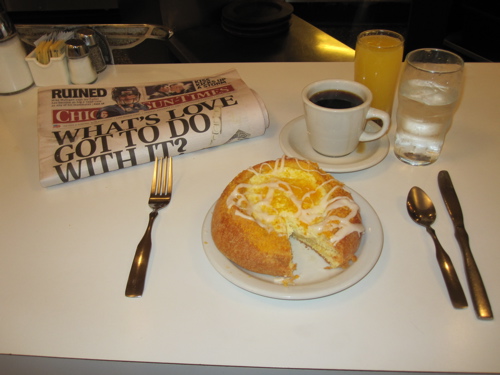 Before I delve too deep into the mire of my own self-reflection and philosophical quandary, allow me to redirect you. Imagine, if you will, you’ve lost everything but the clothes on your back, your old jalopy, and about fifty dollars. You called Gary, Indiana your home, but now, you sit at the counter at Lou Mitchell’s on Jackson Boulevard in Chicago. The waitress brings you a cup of coffee and a cheese danish the size of both your swollen hands and says, “This one’s on da house. Next one you’s gotta pay fer it.” 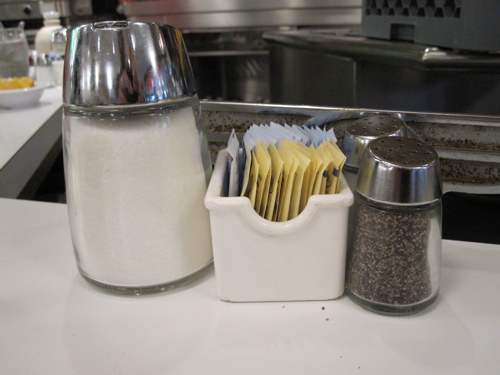 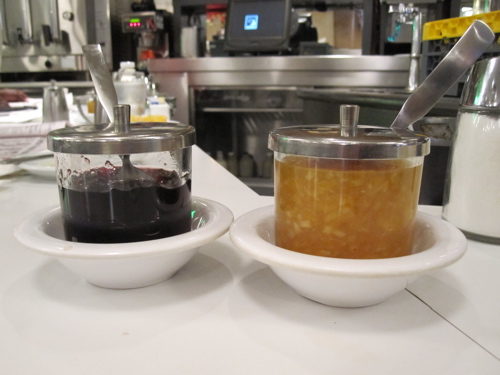 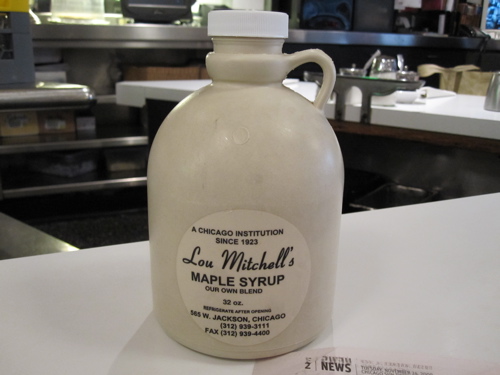 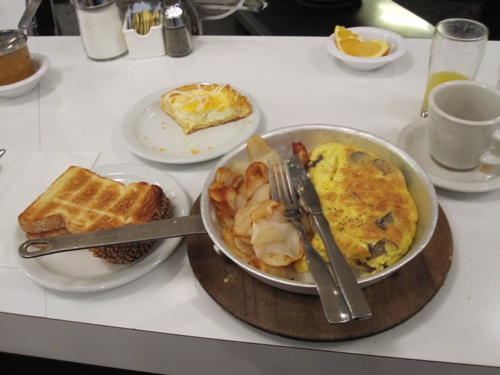 That’s what happened to me, a couple days before Thanksgiving when I made my first visit. I pulled up to one of the winding counter tops at this 87-year-old institution. I sat down, road-weary, bloodshot, crushed, said two things: “Coffee,” and “What’s good?” and what happened next floored me. My server, in fact the entire waitstaff, crowded around my menu ready and willing to help me decide what to eat. As I considered my options, I settled on my standard, a sausage and cheese omelette. “You gotta have a pastry. Here. Free.” Coffee was bottomless. Food was fast. Service with a smile. I even got a little history lesson. As is tradition at Lou Mitchell’s, kids still get a free scoop of ice cream “if they ask nicely.” 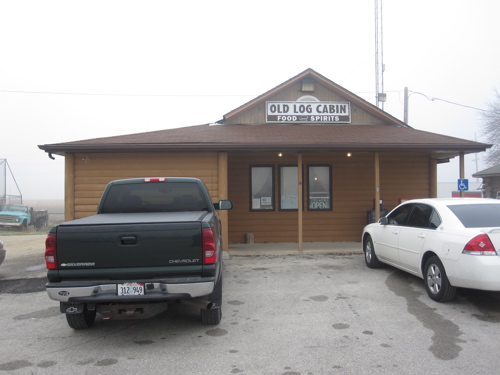 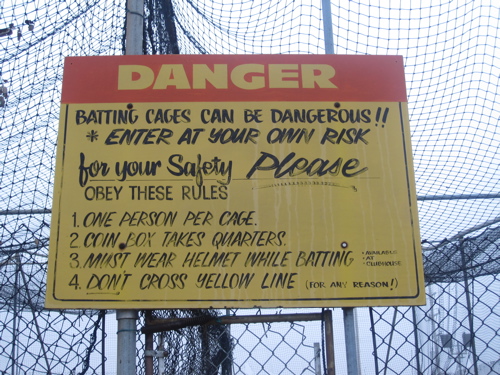 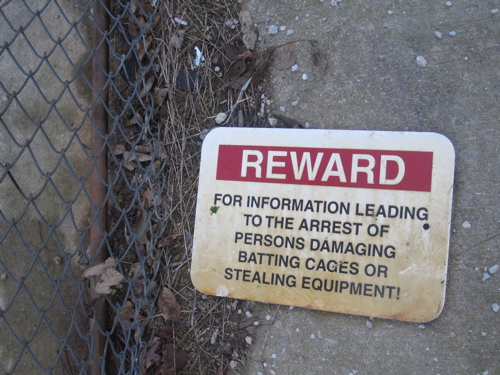 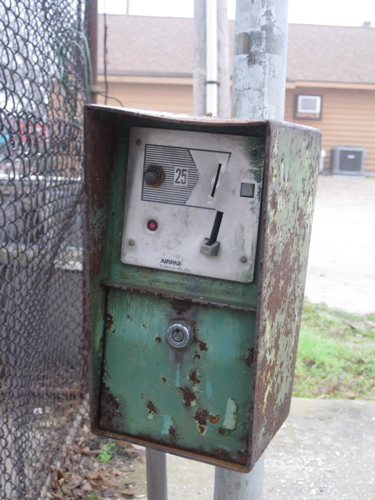 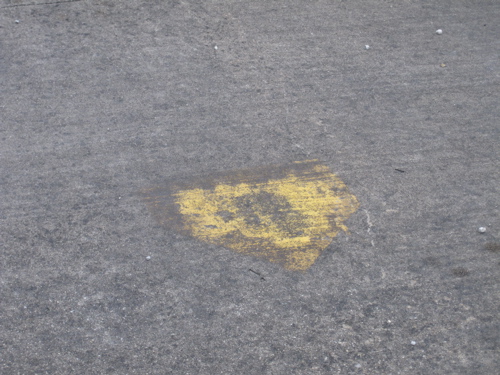 Another old diner I discovered, The Old Log Cabin in Pontiac, Illinois is the kind of place you’d go if a half-hour into your drive you’d sprung a leak or worse a flat. While neither happened to me, I was drawn to this place because I heard they had batting cages out back. I arrived to discover the batting cages died a painful death many years ago. It was so painful, the owners left them there for posterity’s sake. When I walked in, wearing a suit and tie, it was as if I stepped and the earth rotated towards me. Every head in the place left the TV screen and craned itself in my direction. As people went back to their morning conversation, their Regis and Kelly, the daughter of the owner offered me a menu with, “Are you driving the nice convertible?” “Yeah. Am I parked in the wrong spot?” “No, you’re just the only person who’d drive a convertible to eat here.” 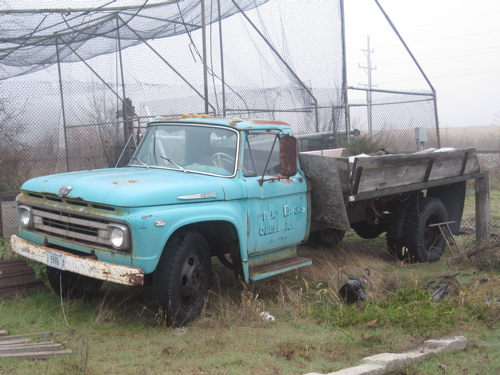 When my food arrived, I must admit I had to ask which was the toast and which were the eggs, but they were cheap and filling and served with a smile, and the coffee was strong and hot. I still wish I could’ve smacked a few baseballs at a chain link fence. I’m sure I’d have worked up such an appetite that they could have fed me a log, covered in gravy, and I would have been happy. 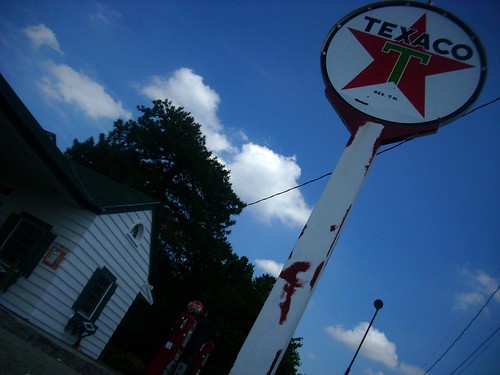 Next stop down the road, Ambler’s Texaco in Dwight, Illinois, the longest operating gas station along Route 66, has been retrofitted with antique oil cans, soda bottles, and many of the employees’ uniforms. 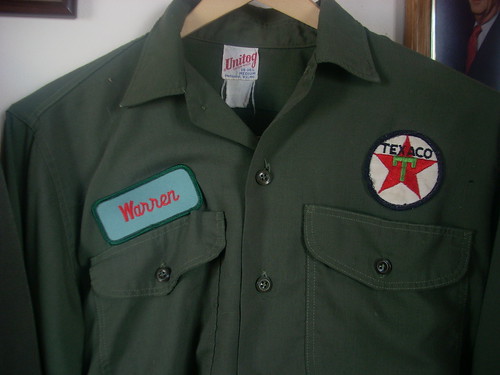 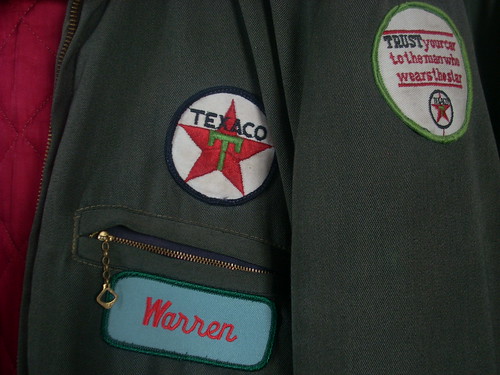 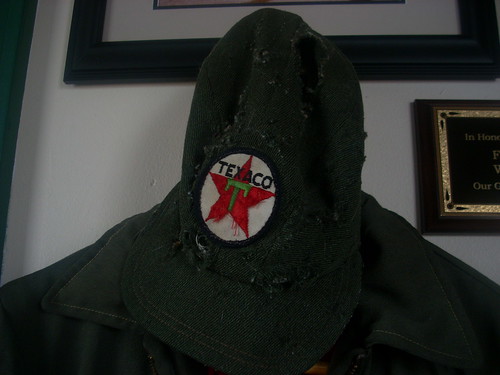 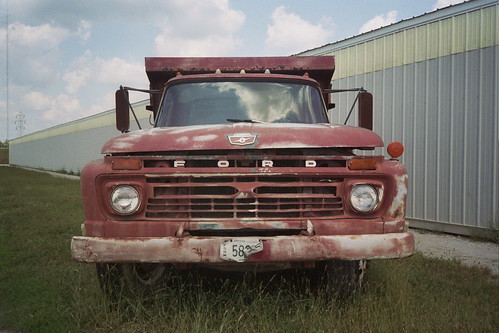 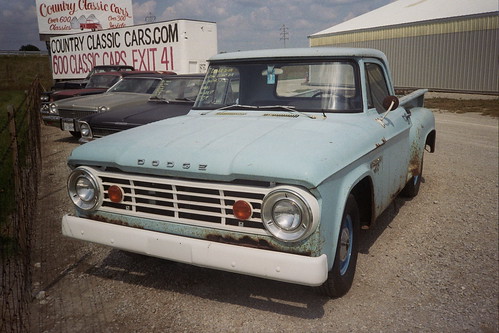 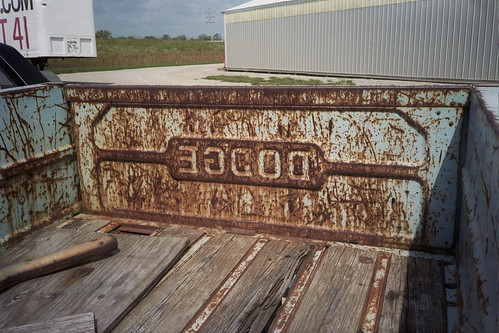 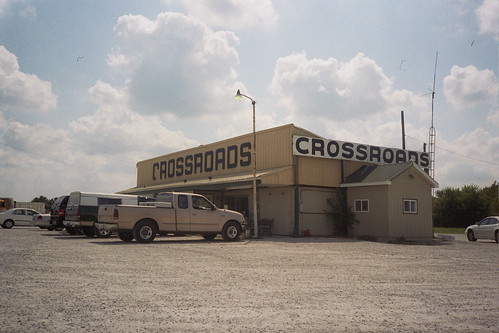 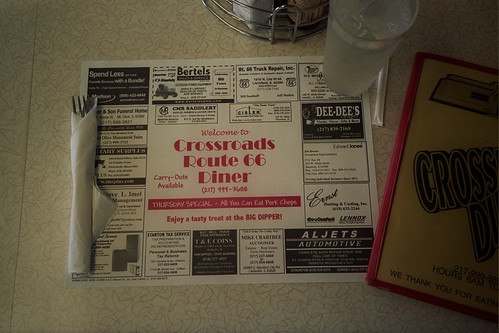 For but a moment, I considered advertising All Plaidout on the Crossroads Route 66 Diner place mat. 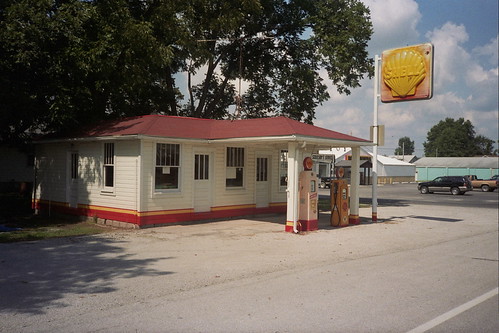 Stomach full, it was time to fill up the tank. By some serendipitous error, the GasBuddy App on my iPhone suggested Soulsby’s Shell station, a long defunct relic that’s been faithfully restored to reflect its glory days, was the closest — and likely the cheapest — station within my immediate radius. 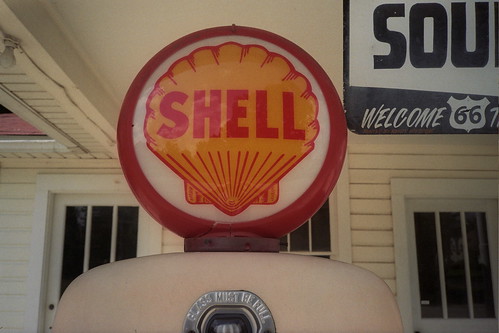 While the wood house Shell station in tiny Mt. Olive was right up my alley, I waited till I was back in Chicago to fill up. 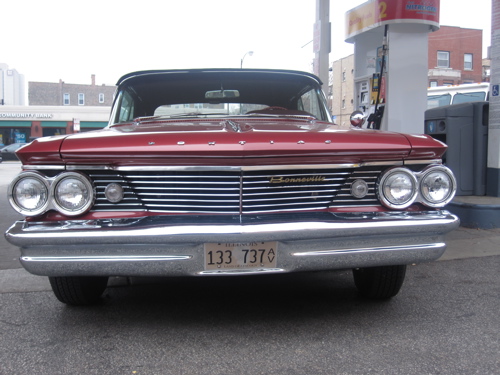 I’m thankful I waited. At a Shell Station in Chicago’s West Loop, this beautiful Bonneville bounced in, boppin’ to Chuck Berry’s “No Particular Place to Go,” a road trip song to end all road trip songs. The gentleman driving it said he worked on it for two years to get everything to his exacting specifications. “Time well-spent,” I replied. “Heck yeah. I’m thinking of wrecking it just to have something to do again.” That’s commitment. 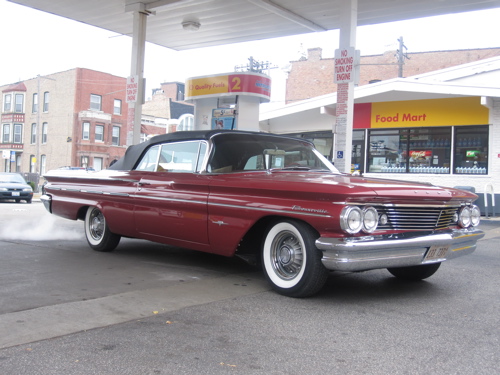 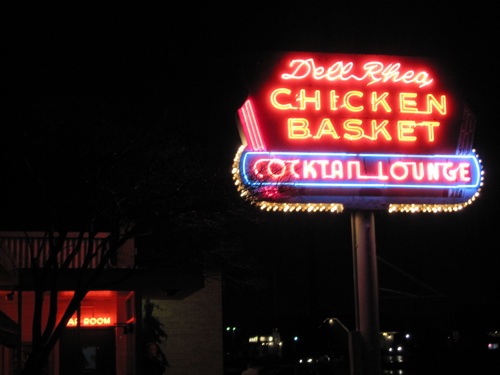 Before heading back out, just another guy on the lost highway, I spent a bit of time hanging out with owner Pat Rhea at his joint Dell Rhea’s Chicken Basket in Willowbrook. I’ve never met a nicer guy, and the food was outstanding. Gabrielle, my bartender, made the selections for me. “Well what’re you drinkin?” “The Silver Bullet,” I said. She matched my Coors Light with a succulent, perfectly seasoned four piece chicken tenderloin that’s not too heavily breaded. It’s matched with their tart, house-made honey mustard and a smoky barbeque sauce. As Pat’ll tell you, it’s amazing. 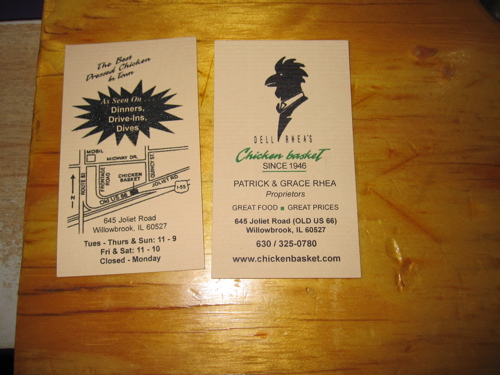 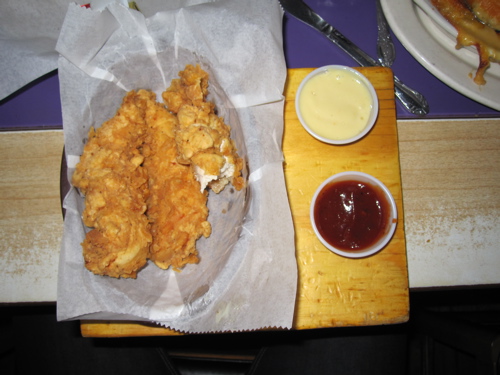 Sucking back on my second Bullet, Gabrielle dished up a still bubbling crust of cheese and noodles and other stuff Food Network’s Guy Fieri called “The Colorado Cheese River running right through Flavortown.” Pat, appointed “Captain Creamy” by Mr. Fieri, simply calls it mac ‘n cheese. And it came, and Pat murmured sucking back on his Spaten, “You gonna finish that?” About three minutes later, he answered his own question. “Nice job… now try the dessert.” 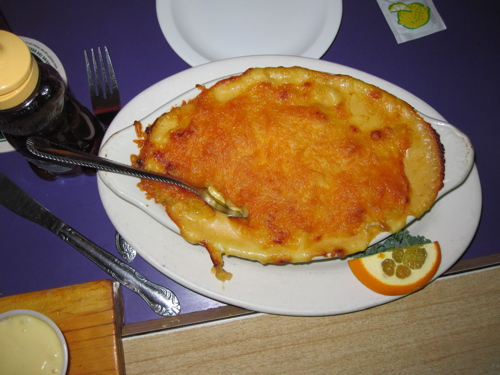 The whipped cream nearly did me in, but the chocolate brownie sundae was the ultimate ending to a fun — and calorie-filled — day eating and sightseeing my way down Chicago’s section of Route 66. Pat even invited me back to try, Man Vs. Food style to out-eat his record of three whole chickens. It’s something like 27 pieces of chicken. I think I can handle it.

For all 145 photos of my exploration of Chicago’s portion of Route 66, see Flickr.