Factory Visit: Cause and Effect 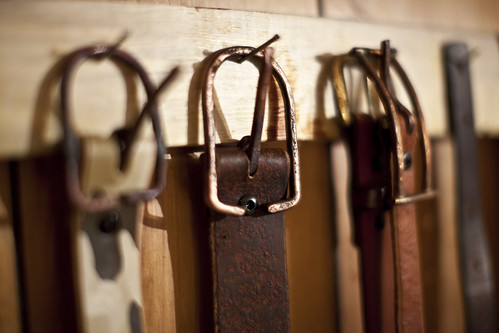 When I told the good folks at Selectism about a trip I took with Joe Gannon to the home of belt maker Billy Moore, they were kind enough to feature my visit.

Barreling down I-40, on my way to Gatlinburg from Nashville, Tennessee, the rain came at me in sheets. Peering over the steering wheel, trying to keep up with Joe’s Monster Truck as he zipped in and out of traffic, all I needed were the sweet harmonies of Bill Monroe and Peter Rowan and a belly full of crappy coffee to keep the metal on the floor. 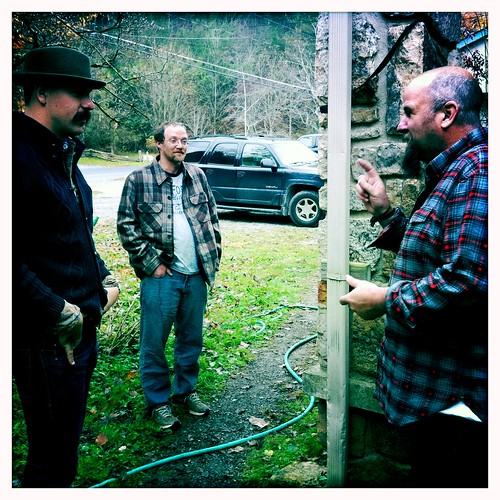 Billy Moore. After a long day of swigging beer and pounding belts on the street in front of New York’s Self Edge, Billy crashed a dinner party I’d organized for some friends. Though it didn’t suit the dinner party, his brash delivery and shoot-from-the-hip demeanor certainly suited his rough hewn product line. Not two months later, again I found myself elbow-to-elbow with the man. We were at a bar in Minneapolis, downing pitchers of Grain Belt and marveling at these cheese-stuffed burgers known as Jucy Lucys. We were fast becoming good friends.

While hunched over the counter at Matt’s Bar, eating what were, I assure you, the last two burgers sold that night, Billy told me the origin story of Cause and Effect.

I’d done metal work for 15 years, making hammered, recycled aluminum plates and trays. I got bored and made buckles and jewelry to stimulate my creativity. From there it grew into another passion. I reached a point in my life where doing thing for selfish reasons — for money or for recognition — seemed sad and pointless. I created Cause and Effect as a way to solve a problem. For now, it’s not much. I’ll donate money from my sales to help some local families or local charities. While in New York next week at market, I hope to spend time at night feeding the homeless. I want to lead a life that might inspire others to step up and work for a cause that moves them.

The next time I ran into Billy, he agreed to meet up with me and my good friend Joe Gannon in Nashville. Somewhere between The Local Taco and the 12 South Taproom, Billy had convinced us to travel to his home on the other side of the state.

Prior to my arrival, my only knowledge of Gatlinburg was limited to the hour I spent Googling wedding chapels after a girl I barely knew accepted my proposal to elope to the Smoky Mountain hideaway. As we pulled past the second of four Waffle Houses, I thought to myself, “Thank God that didn’t work out.” 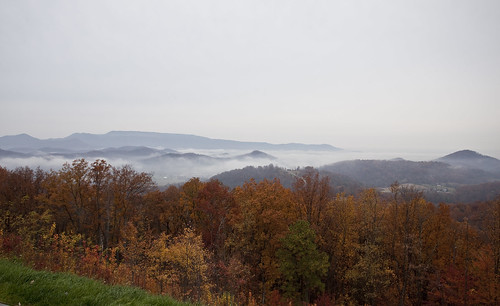 The Great Smoky Mountain National Park backs right up to what amounts to a Hillbillified Las Vegas Strip, and the contrast is alarming. One second, serenity, the next pandemonium – the pancake kind. Past Madame Tussauds, past the Panda Express, winds a road. It traces itself up the side of a tree-covered hill, and dotted alongside are little, ramshackle houses that wouldn’t be out of place in a Bobbi Ann Mason story. At the end of the driveways lie hand-carved signs: Pete’s Pots, Nellie’s Nut Bowls. And I’d hoped as we found our way to the Moore residence, a sign might read “Billy’s Belts.”

Alas, there was no sign. Just a very simple house where Billy and his brother live, work, and play, but from the looks of things, it’s mostly where they work.

With the smell of pork chops sizzling on the four-burner, Billy met us in the driveway. As he gave us both a big hug and a handshake, his scraggly goatee wrenched a big smile. 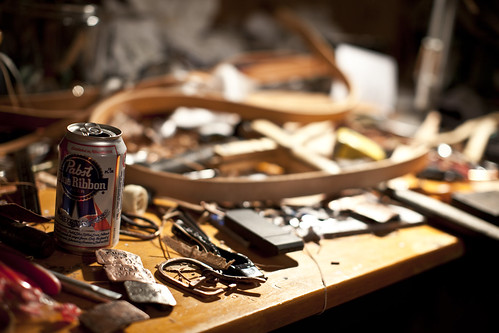 PBR and power tools. Even though it was long after nightfall, Billy set to work, teaching Joe how to work his big, loud, bone-crushing machines. I watched. I took notes. I took pictures. I watched some more. Joe and I got it in our heads that he would learn how to make the buckle and then turn around and teach me. We were all set to do that, when, in his bathrobe no less, Billy’s neighbor came screeching through his screen door. 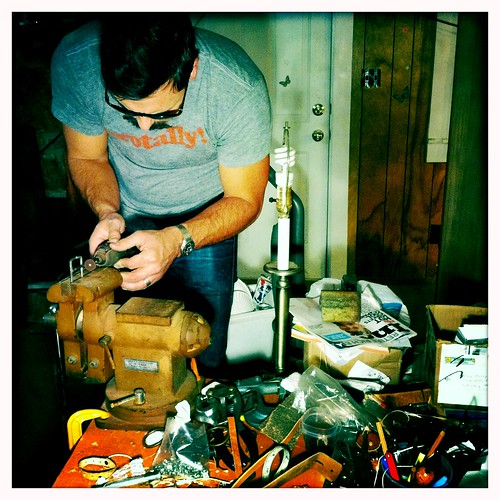 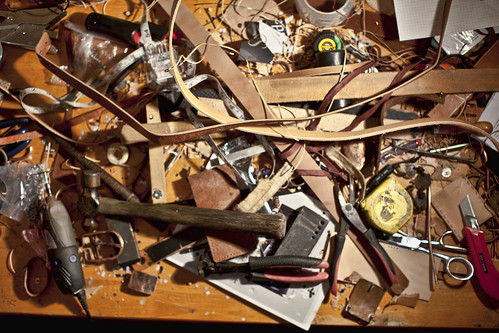 “Billy! What are you doing? It’s ten o’clock at night!”

And then, as if to justify it to himself, he repeated it. 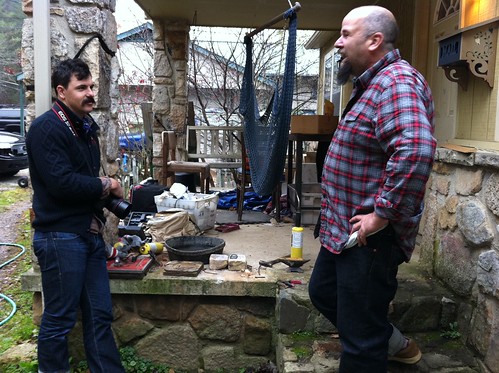 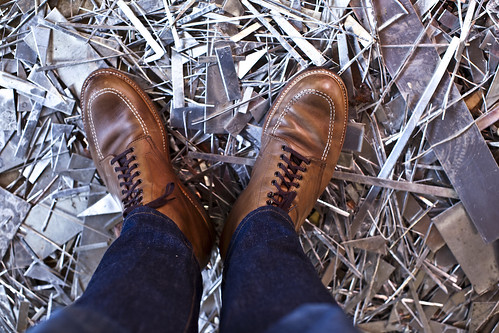 The next morning, after the neighbors were awake and off to work themselves, Billy helped Joe put the finishing touches on his buckle, fashioned from nickel and copper. And then, it was my turn. 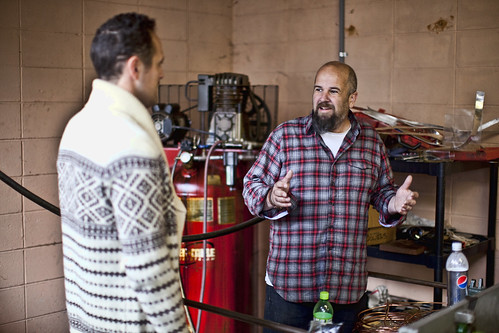 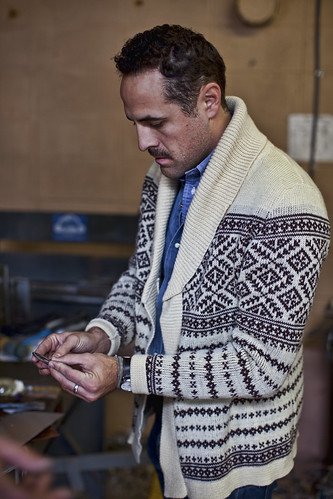 Joe showed me how to cut the thick nickel rod, and then, using a ball-peen hammer and a blow torch, I bent the shortened cord around a D-shaped form designed by Billy. 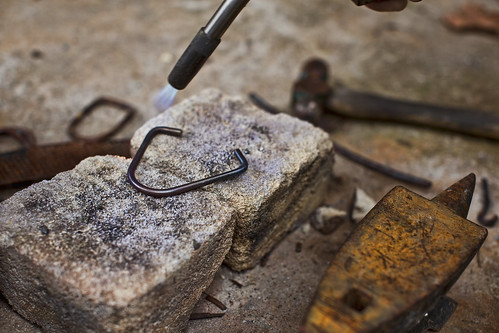 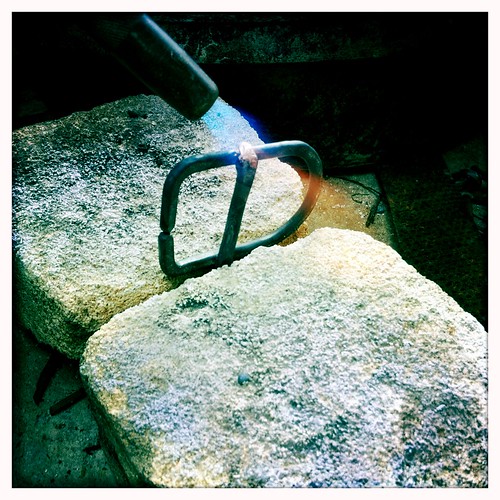 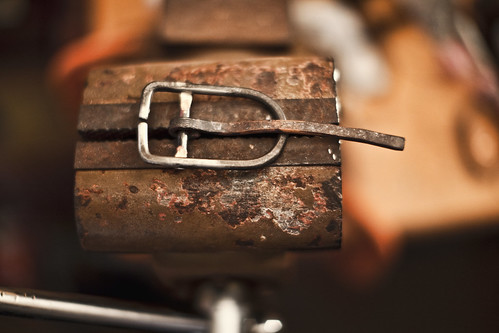 Taking a thick copper coil, Joe handed me the blow torch. He showed me how to bend a three-inch-long piece of the hot copper around itself to create the buckle’s hammer, the moving part that fits in the leather belt’s holes. I cut another inch-long piece of copper which is inserted into the hammer, and acts as its fulcrum.

Handing me two small pieces of silver, Billy cautioned that if I didn’t hit the silver pieces just right, I wouldn’t solder the copper bar to the nickel D-ring. I sandwiched the silver between the copper and the nickel. Fired the torch. Sure enough, I hit that silver all wrong, and the copper bar never stuck. It took another piece of silver. With that, though I had a bit of polishing to do, after a half-hour of bending and soldering, Billy Moore taught Joe Gannon who taught me how to make my first buckle. 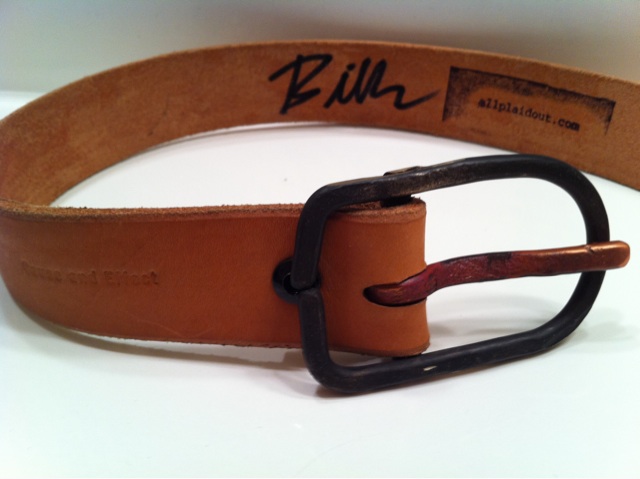 “May I give this to my brother?” I asked.

“You can do whatever you want, my man.” Billy calls everybody “man.”

I slapped it on a piece of naked horsehide, and Billy whipped out a Sharpie and autographed that hide like he was signing a baseball.

“Come back in the spring. We’ll get in the water and hammer out some hides.”

As I made my way back to 40, new belt in the passenger seat, hands still black from the soot, I found myself satisfied. I assumed it was the satisfaction of making something with my hands. Whatever it was, I called Billy right away.

“You knock out another two hundred of those. Let me know if it’s fun then.” 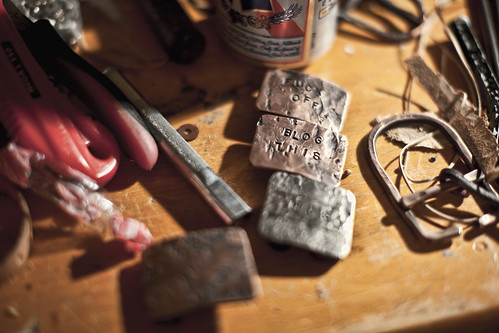 He was right. Effectively, what Billy does best, in a world where the sameness of the mass-produced is the answer, with his one-of-a-kind leathers and buckles, he poses the question, why? 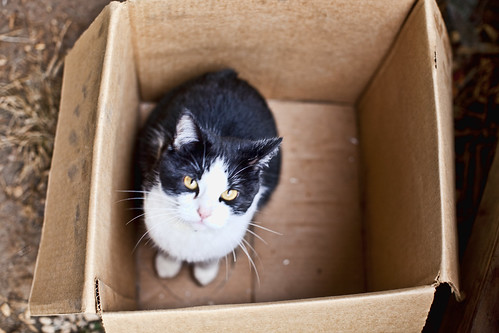 Cause and Effect will be showing at the Ace Hotel in New York January 15th through the 20th. Contact billy.causeandeffect@gmail.com to set up an appointment.

For more of the photos Joe and I took at Billy’s place, visit Flickr. Thanks to Nick, Jeff, and everyone at Selectism for allowing me to share Billy’s story.