The Make Anything Project: Winter Session 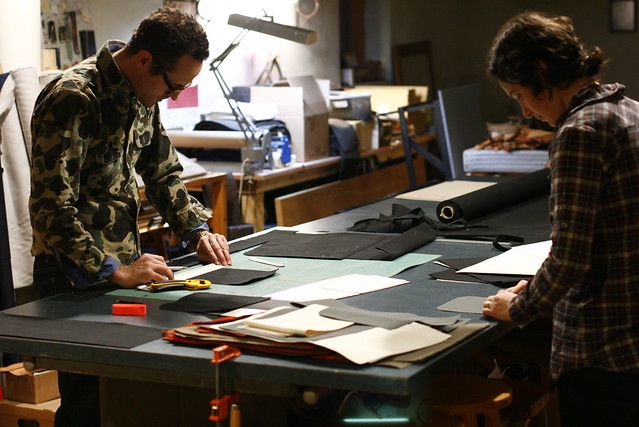 Can’t sew. Can’t really cut. Can barely draw. Before a few cold nights in December, I’d never made a bag. But I knew what I wanted to make: an oversized leather and canvas tote bag in black, a Christmas present for my girlfriend, who rarely leaves the house without — and I’m not kidding — at least two tote bags on her shoulder. Though I watched one being made in Maine and once at my friends’ Tanya Fleischer and Roy Katz’s apartment in the Andersonville neighborhood of Chicago, I’d never attempted to make a bag like this before, but I knew I had it in me. And fortunately, I had a lot of help from Tanya and Roy. You see, they run a successful business out of their apartment’s work space where they make a variety of canvas and leather bags and accessories under the name Winter Session.

Consider this is a call to action. The Make Anything Project. 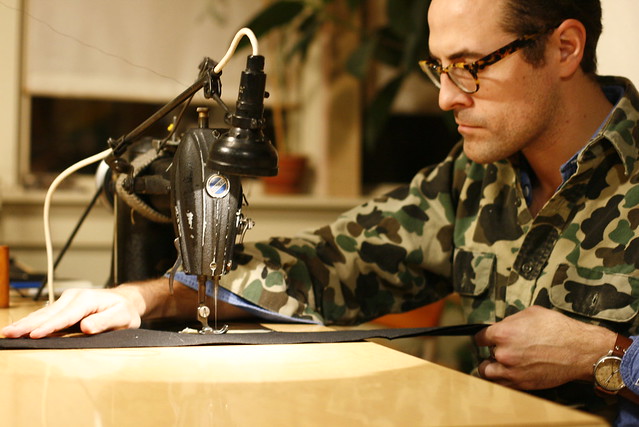 I am still not sure these people really exist. Tanya and Roy inhabit in a world entirely their own. They bound through life with a thoughtful joy. I love the way they look at life. When we get together, they laugh at each other and at me a lot. Roy has a grin wide as a boulevard, and Tanya’s giggle could rouse a hibernating bear. They have more life experience individually, than some couples have in total. In Colorado, they were high school sweethearts. In Vermont and Kansas and Missouri and Illinois, they were college students. In California, they worked. In India, they worked some more. These experiences add up to Winter Session, an honest company, by honest people for honest people. I almost feel unworthy. Almost. 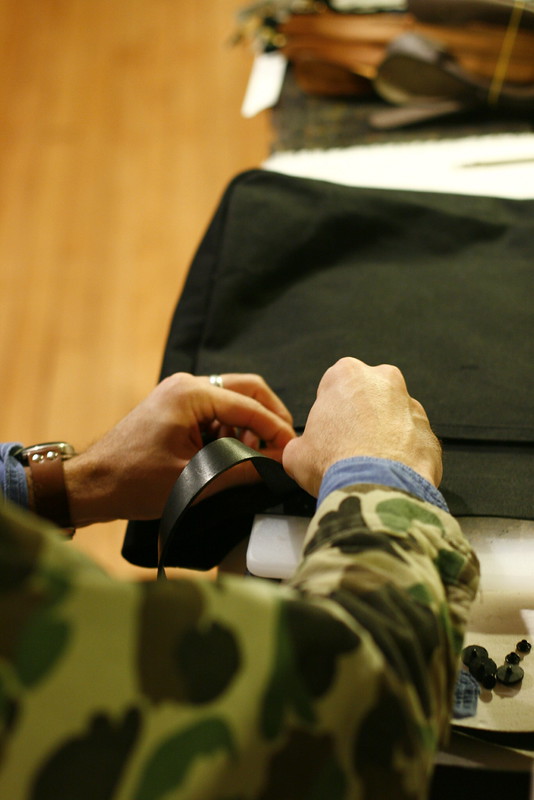 Their impeccably-appointed apartment in the Andersonville neighborhood of Chicago is something from another era. From the antique, and likely priceless Hermès bag their landlord uses for a tool box, to the various found items from their travels in Europe and Asia, to all of Tanya’s art projects while a student at the School of the Art Institute of Chicago (I recall a large pvc pipe running the length of the apartment which was either used for a musical instrument or some kind of contortionist’s device), their space is half as good-looking as their products, which are half as good-looking as they themselves are. Which, for those keeping score at home, is a whole lot of good-looking. 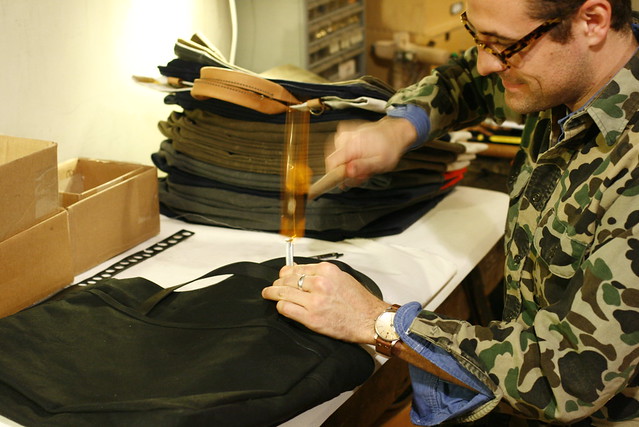 One Sunday in the fall, at the weekend market my girlfriend ran with three of her friends, she’d pointed out a bag she thought she’d like to have. It was twice the size of the flimsy tote bags she’d grown accustomed to carrying but, “Honey, it’s white.”

Right then, a light bulb went off. I had an idea, and fortunately for me, it wouldn’t take long to learn if my idea was just an idea. Winter Session was selling their stuff at the market. I ran over to Roy and mentioned to Roy that I had a “design” in my head. He suggested I fashion a pattern any way I could, and we’d give it a shot. That evening, I made up some excuse, and I went to my office. With some Scotch tape, some looseleaf paper, a desk ruler, and a Sharpie, I made a pattern. 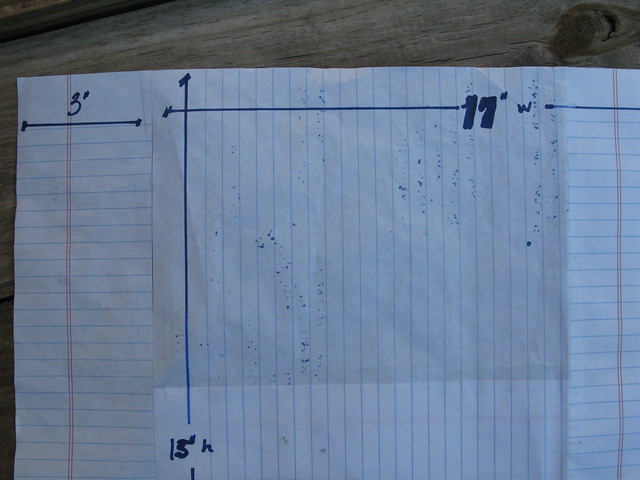 A few weeks later, I brought them my design. Tanya giggled. Roy grinned and said, “The College Rule Bag.” 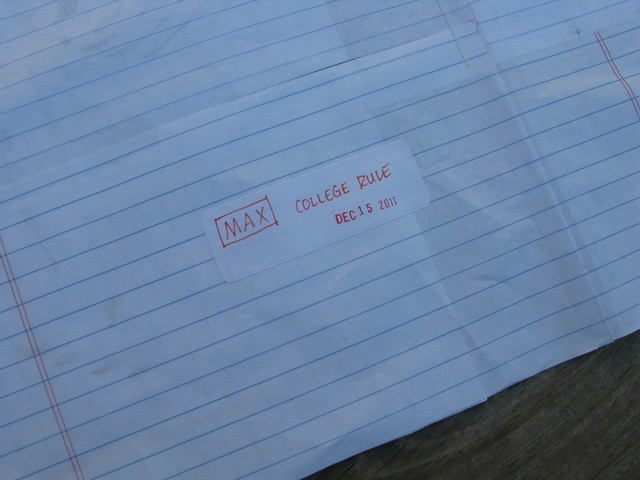 When I cut the side panel, I didn’t leave enough room. With the flotsam and jetsam a modern American woman carries, she can’t fit her running shoes. The bag is too narrow. However, when she opened it on Christmas morning, she gave me a big hug. And for that alone, this experience was more than worth it. 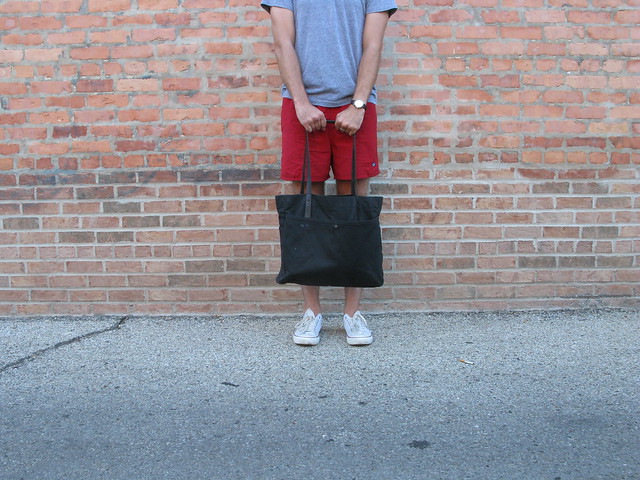 After a short online chat with N’East Style’s Christine Mitchell where I challenged her to “make something this year… anything,” I decided I’d use the photos Tanya and Roy had taken during our bag-making party as collateral: “If I can do this, anyone, literally anyone can do this.” And thus was born the Make Anything Project.

I’m not making any rules. Just make something and send me the story. Photos, words. I would love to start the conversation here. Think about it. There has to be something you’ve always wanted to make. Find a friend who makes things for a living or a local maker and shadow them for a day or a weekend, and make something. Let this post be your guide.