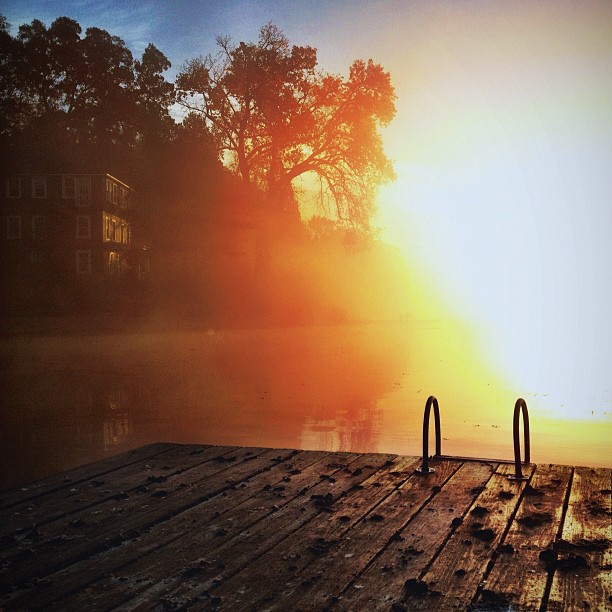 As December dawns, I thought it only appropriate to share the music that I’ve been listening to the last couple months.

October was filled with mornings. I found myself up-and-at-’em earlier and earlier. Whether it was for a run, for an assignment, for a meeting, or just for fun, I greeted the sunrise and it greeted me right back. I recall a particularly early, particularly trying morning run on Chicago’s lakefront trail listening to the Beach Boys. I nearly broke my stride hearing Carl Wilson strain that long “eeeee,” “Rise up early the day won’t let you sleep.” And on that very same lake — but in Milwaukee this time — I rocked out to Shuggie Otis‘ solo on “Bury My Body” which starts at minute 5:20. I looked at my handy-dandy Nike Plus app, and I’d had my fastest mile ever during that song. Thanks, Shuggie.

November, on the contrary, was all about the nights: mingling too long with Manhattans after midnight at Meat in Louisville; bolting some past-my-bedtime bacon pizza at a bowling alley with the likes of Christine Mitchell and James Fox; eating pho with Roy and Tanya’s family in this strip of down-and-out Vietnamese restaurants; and staying up later than I’ve stayed up in a long time, running all over town to raise a glass in honor of my old friend Mike on the eve of his birthday (that night, we even made him DJ. He’s a much better jockey than I. You should hire him to make your music).

Also, I kept returning to all this music from time spent living with Blake Royer (in Indiana, Ireland, New York, and here in Chicago — kind of), who I learned this month is leaving for the whiter pastures of Canada.

And here it is December, my birth month. Another year has come and gone. What a year it’s been. Plenty of good to go with the bad. I’m sad to see one of my oldest friends move away. Again. At least Toronto is closer than Tallinn. But I’m happy for the new opportunities presented to each of us at year’s end.

In tribute to Blake, these mixes end with the words from one of my favorite standards, “It Had to Be You.” I like to think of this as the unofficial theme song to When Harry Met Sally. While we were roommates, after hours and hours of viewing and reviewing (seriously, you’d think it was the only movie we owned), Blake and I — and by hook or by crook our significant others — would say this is our favorite movie. And so it is with some sadness, I present Nilsson’s timely interpretation. He ends on a rather bittersweet note, as only he can with, “It had to be me, unlucky me. It had to be… me.”

And the strings play out to “Somewhere Over the Rainbow.”