There are plenty of old adages, poems, and songs that’ll tell you the truest friends are the ones there for you when you’re in a tight spot. Well, over the course of the past couple years, no matter how good or bad it’s gotten for me, Seth Putnam’s been there. Though we’re more than a few years apart, this young man carries a well’s worth of wisdom, and he’s become a trusted partner in a number of different capacities. Truly, there aren’t enough letters in the alphabet to spell out just what this guy means to me.

And like me, he cherishes his relationship with his dad and works hard to model himself after the men he admires. 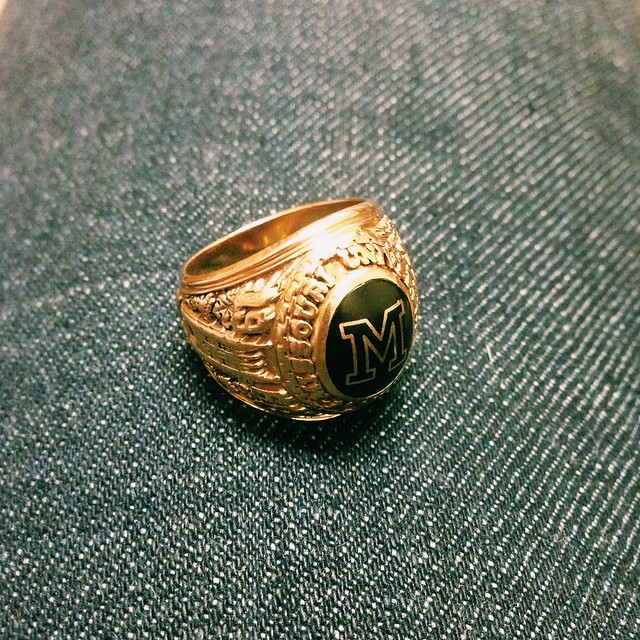 I was about six or seven. It was the morning. My father’s face was soapy when I walked into the master bathroom. The whole place smelled like steam and Neutrogena Rainbath, his go-to for shaving, even though it’s a body wash. Watching as he dragged the razor across his lathered stubble, I absentmindedly picked up his electric shaver and ran it over my own smooth face before shifting my curiosity to something more interesting which he’d set on the counter: his class ring from the University of Missouri. It was gold, with intricate details that depicted the six columns and Jesse Hall, the university’s main administration building. On one side it marked the year of his graduation, 1968. Encircling the jewel case was engraved, “Missouri University M Men.” On the black dome of the jewel a serif “M” was laid in gold leaf, a distinction reserved for varsity athletes.

I put it on each of my fingers, trying unsuccessfully to find one it would fit on without flopping around. “Can I have this when you die?” I asked.

“Don’t know. One of your brothers might want it, too,” he said before taking it from me, slipping it back on the ring finger of his right hand, and heading off to work. He always wore that ring. I can still picture it moving back and forth as we sawed plywood to make the best toy of my childhood: a double-barreled rubber band shotgun from the Great American Depression Book of Fun. I can also still picture his giant index finger, as he wagged it in front of my nose nearly making my eyes cross, as he handed down some strict pre-emptive instructions not to “shoot anyone in the face” with this new weapon of minimal destruction. Not fifteen minutes later, it was that same ringed hand that yanked the shotgun from my clutches after I had concealed myself in my dark bedroom, shouted “Come and get me!” and delivered a high-velocity rubber band straight to his eyeball. Needless to say, he got me.

I can still picture that ring on his finger as he’d turn the pages of a Louis L’Amour novel while we sat munching on popcorn in front of our soapstone fireplace, reading aloud to our hearts’ content. I can picture it on his finger when he’d dive deep like a sea turtle into Table Rock Lake, stretching his hands out into the murky water in front of him, as I held my breath clinging to his neck. I can picture it when he clicked the camera shutter at my high school soccer matches, when we slammed steel fence posts into the rocky Ozark earth on our farm, when he’d catch me in a lie, when he’d celebrated my accomplishments or those of my siblings. There are plenty of memories I couldn’t have had of the ring, because it came into existence a full 20 years before I did. There it was when he gripped the steering wheel of his Volkswagen bus, piloting the family to Alaska, leaving behind his own father for a time. It was there when he returned home after 11 years to work at my grandfather’s lumberyard.

The only time it wasn’t on his finger was when it was on mine, on the night of my 21st birthday, just before my own graduation from the University of Missouri’s School of Journalism, but you could see signs of it on his finger, a pasty white strip of flesh on the top side of his finger; underneath was a patch of smooth skin, polished from forty-two years of wear.

I have the tendency to find symbolism in things I carry, for within an object itself are dozens of stories, dozens of memories. There’s nothing about this ring that inherently builds character or that means I’ll practice commitment if I wear it. Yet that’s what happens to me when I put it on. I’m reminded of the young man my father was, working through his hopes and fears. In it, I see a middle-aged father teaching his son to be a man of his word, to show up for team practices, to reject personal whims in favor of responsibility. And today, in it, I see a more senior version of that same man, committing to his wife and family for forty-five years. If given the choice, I wouldn’t have bought a class ring for my graduation. It was always weird to me to see young guys wearing jeweled “Class of Oh-Whatever” bands, and the accessory looked just as strange to me as I’m sure it does to others when I wear my father’s today. Truth be told, that time when I first discovered it on the bathroom counter was probably the last time I was very interested in one having one of my own. But this one? I’ll wear it forever. Not long ago, I went back to Mizzou for a conference about narrative nonfiction journalism. I sat next to Wright Thompson, one of the best storytellers working today. He noticed the ring. I told him the history. “It’s not stylish,” I said, “but it means something.”