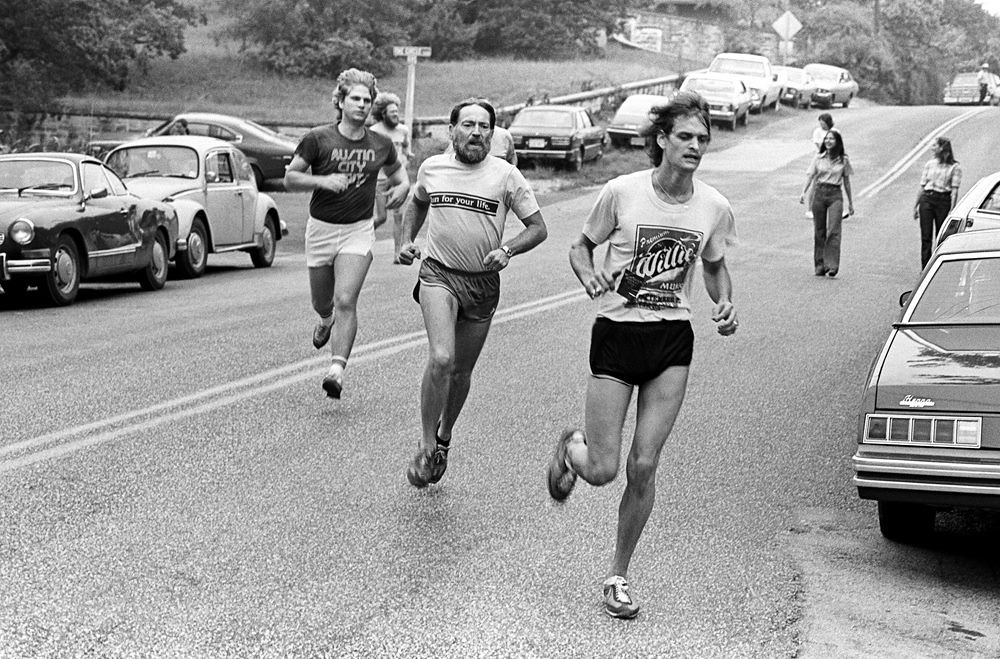 There are any number of adages about walking in another man’s shoes one could apply as a means of introducing the story of Willie Nelson’s New Balance shoes. I assure you Mr. Nelson himself has a handful of lyrics that would lend themselves nicely to such an introduction. Instead, I’d like to begin by explaining how I came upon this post. 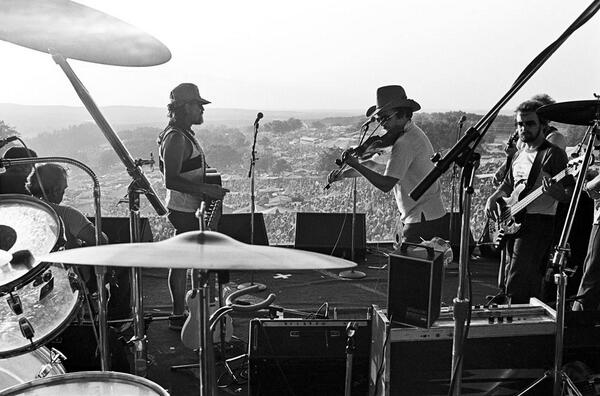 My twin uncles Mark and Matt were two of the first guys I idolized as a little kid. My dad’s younger brothers were cool. Artists with a passion for hunting elk, there’s this story they tell of Hank Williams, Jr. offering to buy one of their bronze statues of an elk or of a cowboy on a bucking bronco or something like that. My first memories of Willie Nelson are wrapped around hearing his voice pour forth from factory-issued speakers while my legs dangled from the front bench of one of my uncles’ pick-up trucks.

Since then, Mr. Nelson’s music has been a part of mine and my family’s life — a part I largely disregarded until I re-discovered his brilliant songs in early adulthood. 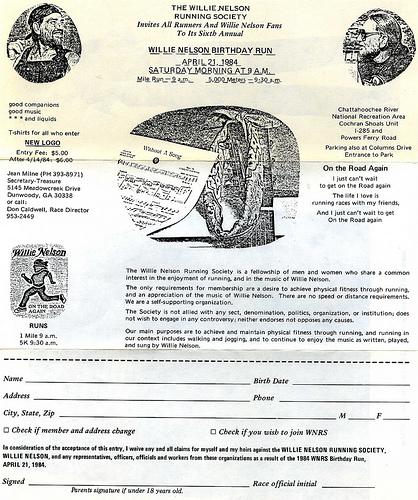 Then there’s the running. Growing up, I recall sneaking around in my dad’s closet and finding this old pair of blue New Balance 320s which he told me he wore when he ran 5ks and 10ks in the 1970s. Around the time of my dad’s running exploits, Willie Nelson left Nashville in a cloud of dust (among other things) and returned to his home state of Texas, and threw his sizable, embellished ten-gallon-hat into the ring of the burgeoning singer-songwriter movement beginning to crest there. And underway was this massive running boom. The hippies were hitting the trails with nothing but a bandana around their heads, some fitted shorts and simple, synthetic and leather shoes on their feet. And with a relentless tour schedule (Mr. Nelson has a song about it. Maybe you’ve heard it.) taking its toll, Willie Nelson found running — or perhaps better stated, running found Willie Nelson.

“For a health kick, I ain’t on one. But… I find that running makes me feel better. It had gotten to the point where I was killing myself at night, so I had to do something in the daytime to make up for it. Now that I run, I don’t stay out as late as I did. I don’t drink much anymore, and I don’t even smoke cigarettes…. It’s not that I’m all that strong willed. It’s just that when you’re done running five miles you don’t want a drink or cigarette. All you want to do is flatten out,” courtesy of  Texas Girl, December, 1979. 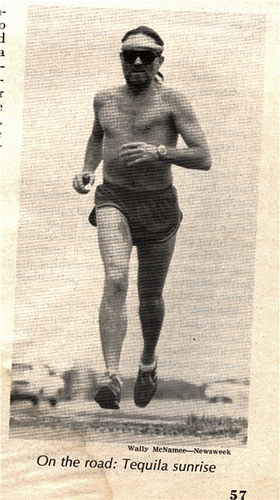 “More than once, I’ve gone jogging in a town I don’t know and had to knock on a stranger’s door and ask directions to get back to where I started.” from the Tao of Willie. 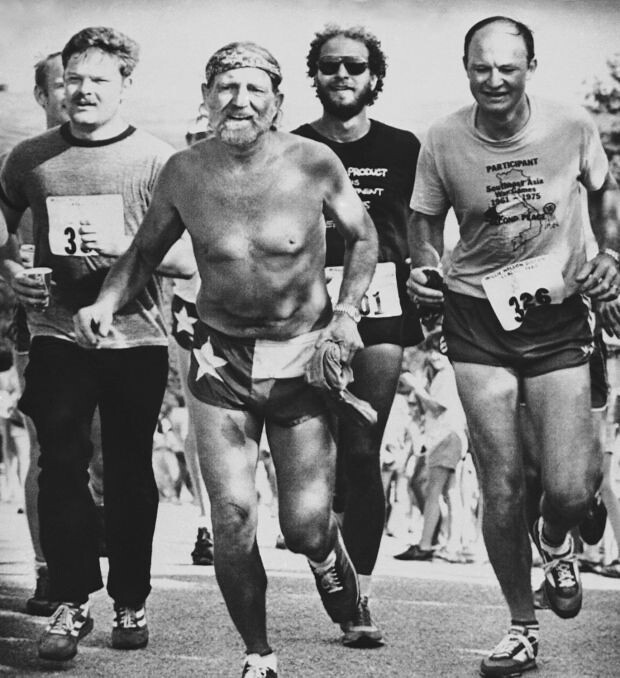 Running became such an integral part of Mr. Nelson’s life that he began to run races. For a time, at his Pedernales Country Club outside Austin, he hosted the “Willie Nelson Distance Classic.” I was lucky enough to find a vintage t-shirt online from the race that was held in June of 1980. According to one source at the time, “More than 1,000 runners entered the race which Nelson hopes to make an annual event.  Nelson (47) finished the hilly 6.2 mile course in one hour, seven minutes and 45 seconds.” 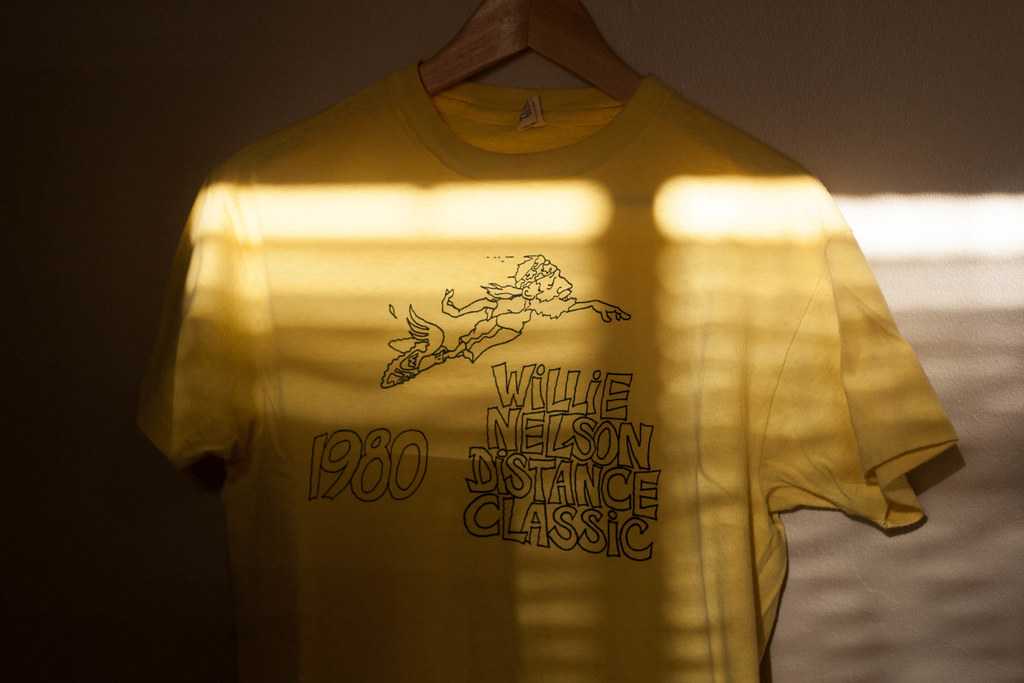 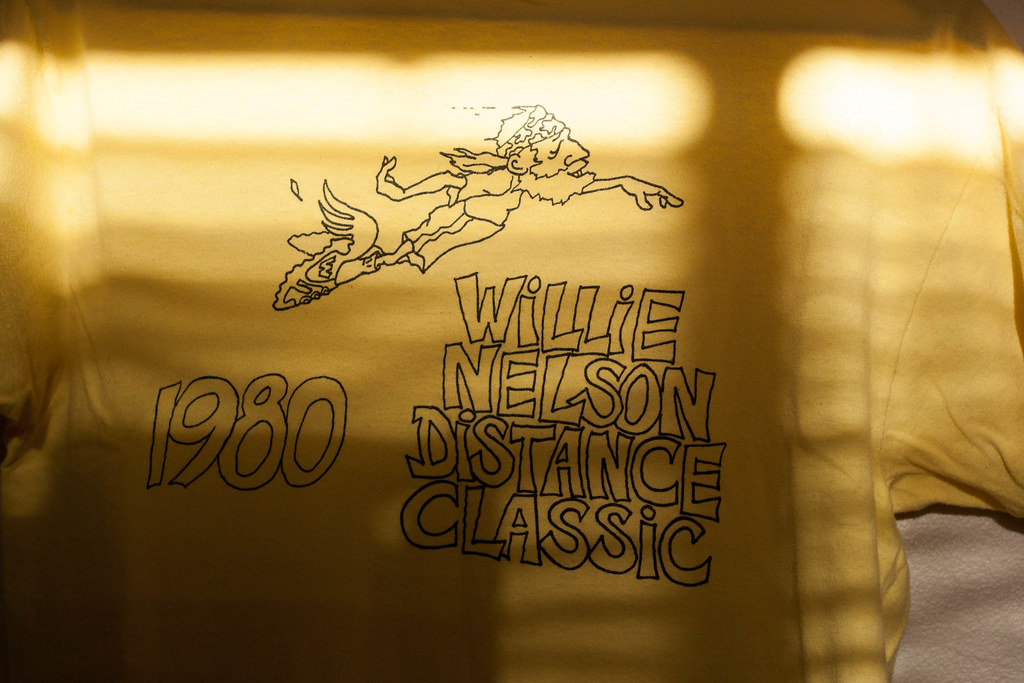 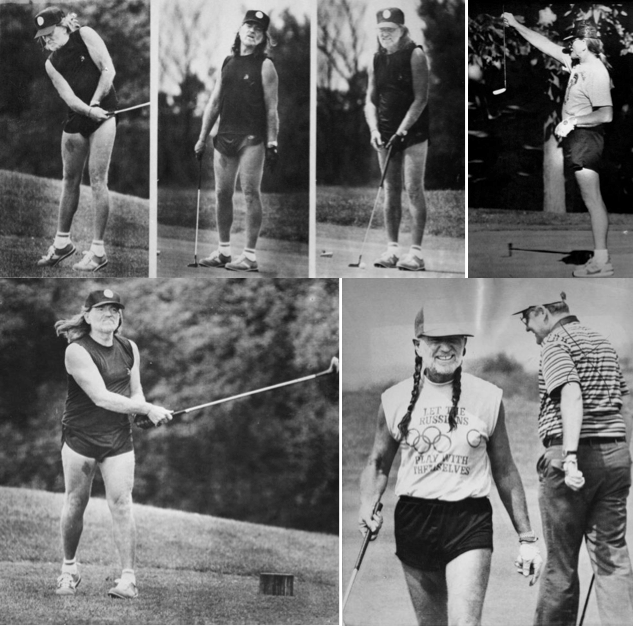 And I’m surprised his running/golf hybrid game has not as yet taken off.

“Willie is very big on fitness and the fact that he is still putting in the miles on the road and working around the clock lends some fact to this. He used to enter road races and I’m not sure if he invented a golf game for fitness folks, but it is different than the one we watch on television. The winner is the person that can run 18 holes the fastest and by adding the number of strokes and the running time determines the winner. Fastest runner with the fewest strokes is the winner and gets to buy the beer.” from Moe Johnson of the San Marcos Record. 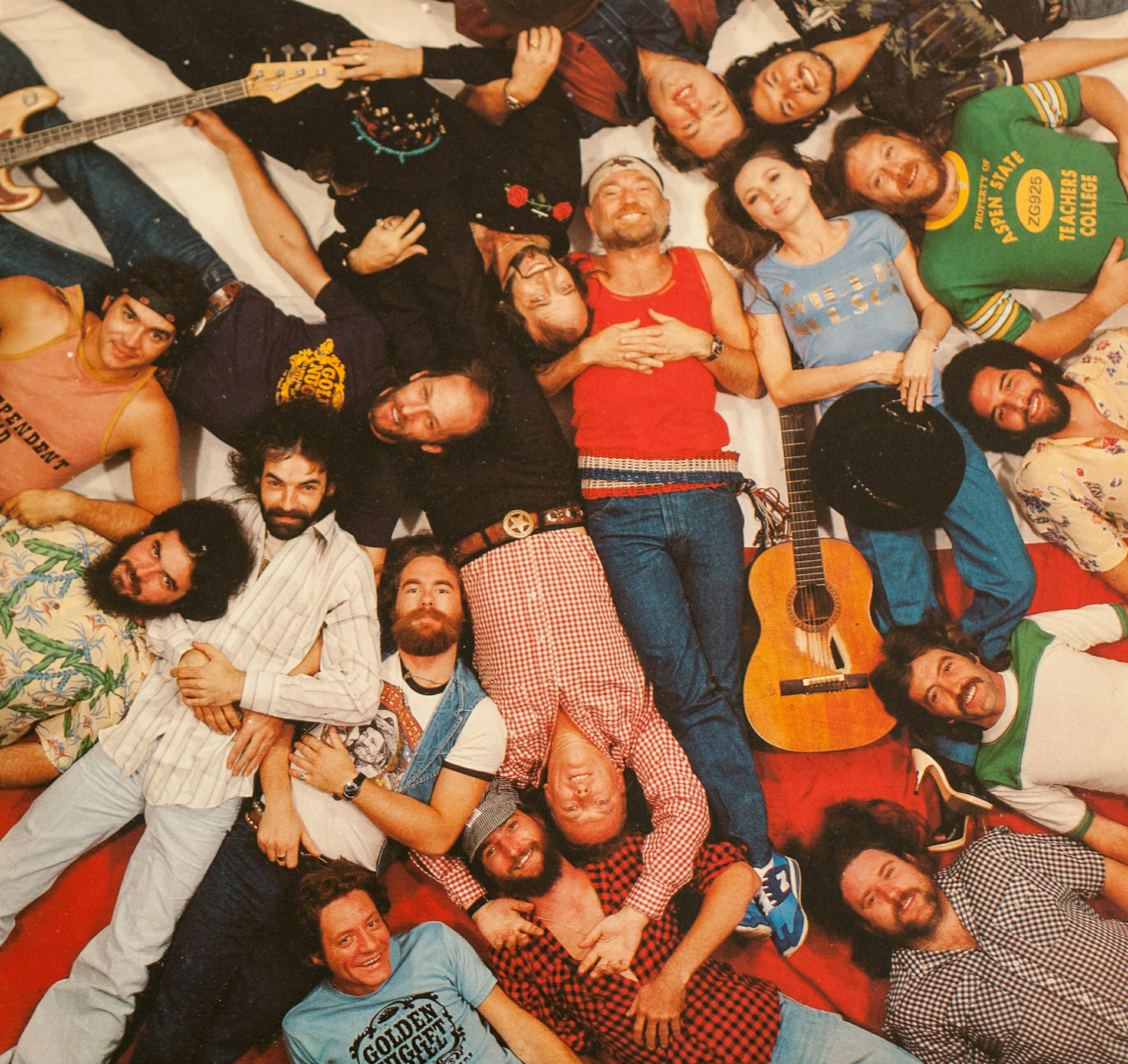 And though, early on in his running life, Willie Nelson wore the same 320s my dad wore, as can be seen in this photo from inside the fold of the 1978 album Willie Nelson and the Family Live and on the cover of 1981’s Somewhere Over the Rainbow, at some point he discovered the unparalleled comfort and durability of the 496, a walking shoe. On a recent trip to the Country Music Hall of Fame in Nashville, I took an abundance of detailed photos of a pair of Mr. Nelson’s custom 496s currently on display in the lobby. 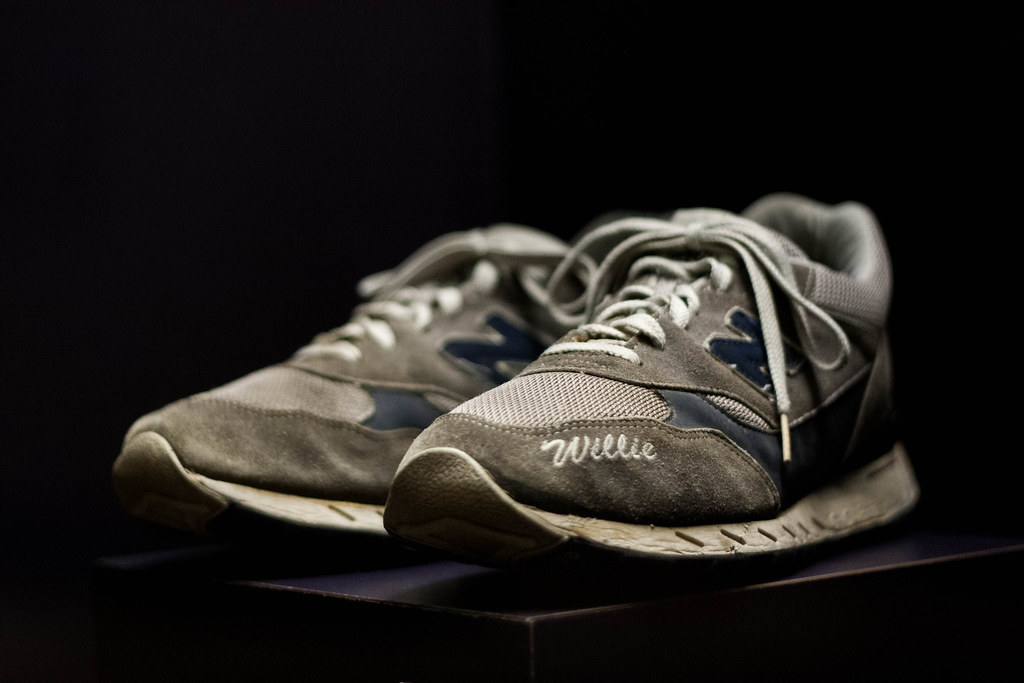 And earlier in the year, I reached out with some questions to the folks at New Balance, who were kind enough to humor me with the following statement. 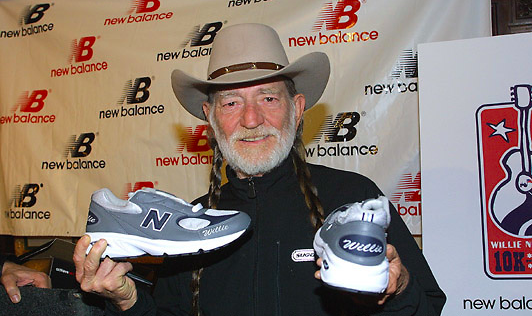 We make them at our Lawrence, Massachusetts manufacturing facility. We knew Willie was a New Balance fan so when we were presented with the chance to work with him on a running event in Austin, Texas with one of our retailers to benefit Farm Aid – it was a great opportunity.  I believe it might have also been timed to our newfound ability to do personalized embroidery at our factory in Lawrence when we added new machinery – which was around that same time. Our manufacturing team members have enjoyed making Willie his 496 New Balance shoes and over the years have added different special embroidery elements on them such as a guitar or his name or Farm Aid. – Amy Dow, New Balance 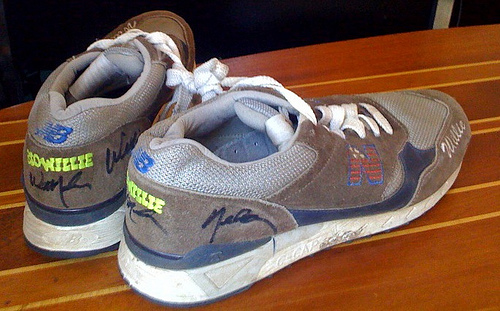 Thanks to Ms. Dow at New Balance, to Linda Lee Banks, the author of the authoritative Willie Nelson fan site, Still is Still Moving, to my good friend Adam Geremia, author of the inspiring Tumblr which explores that early running boom, They Call Us The Seekers, and to those of you who found your way to the end of this lengthy headlong dive into the world of Willie Nelson’s footwear choice. I saw this as something of a tribute to this year’s running of the Boston Marathon and to Mr. Nelson as he approaches his 81st birthday at the end of this month. If you’re still hungry for more, there are plenty of photos in this Flickr album that didn’t make the cut. Let’s end it with some inspiring thoughts from the man himself. 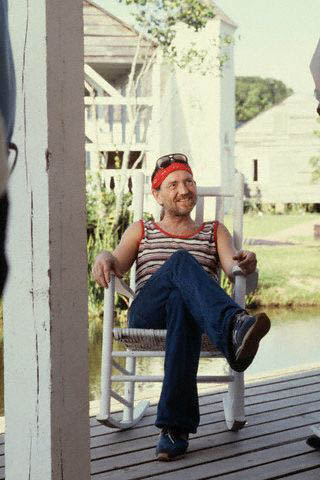 “I just try to exercise. I try to do enough in the morning to make up for what I did, detrimentally, the night before. I try to make it even out, but you know, we don’t live the greatest lifestyles out here traveling on the road and eating whatever we can get a hold of. So, any kind of exercise we can do daily is good, and I try to get in a run or a bike ride or something every day.”

“I enjoy running around Austin. I enjoy going downtown and running on the rivers and lakes down there, and you see just loads and loads of people doing it every single day. There’s not a more beautiful place to run and Austin has so many great roads and trails.” – Willie Nelson, courtesy of Still is Still Moving.